Sichuan’s worst drought in over half a century forced the Chinese province to extend power cuts for industrial plants. Power rationings are essential to ease electricity demand due to a menacing heatwave and limited rainfall that is driving down hydropower generation while cooling demand skyrockets — the combination is dangerous in terms of grid stability and is primarily why power cuts were prolonged.

Morgan Stanley analyst Simon Lee told clients Sunday that the provinces with 84 million people and a key manufacturing hub for semiconductor and solar panels faced “the hottest temperatures and the worst drought of the past 60 years.” 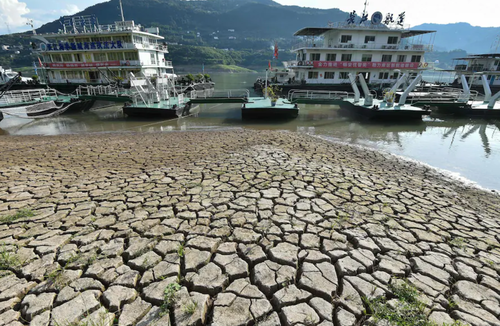 Sichuan heavily relies on hydropower generation for 82% of its power needs. About half of the renewable energy source has been slashed because rainfall along the Yangtze River since July has been 45% below average, the lowest since 1961. Falling hydropower generation comes as electricity demand in the province jumped 65 gigawatts, nearly a quarter higher than last year. 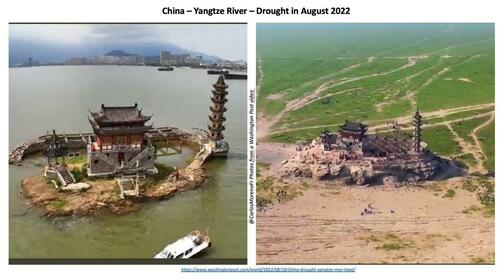 Bloomberg outlines the largest impacts of the heatwave and power rationings on an industrial basis.

Sichuan produces more than a fifth of China’s lithium, according to BloombergNEF, making it one of the industries most exposed to the province’s power cuts. Top global battery producer Contemporary Amperex Technology Co., which has its second-biggest production base in Sichuan, has already halted production there.

Goldman said the power curbs could cost about 5% of China’s monthly output for lithium chemicals, but flagged a potentially bigger impact on lithium hydroxide and so-called “LFP” cathode used in batteries. But it also said EV-related sectors will probably get priority when industries are allowed to ramp up again.

The Sichuan disruptions add fuel to lithium’s blistering rally in the past year. The price of lithium carbonate reached its highest since April by the end of last week, and isn’t far from a new record.

Power-intensive aluminum smelters are often at high risk when governments want to cut electricity use. Goldman says some 360,00 tons of annualized aluminum capacity has been closed, with a further 300,000 tons at risk — adding up to about 1.5% of China’s capacity. While Sichuan is a notable aluminum producer, it lags far behind top provinces Shandong and Xinjiang. And neighboring Yunnan — a major source of new output — hasn’t been hit by weather disruptions.

About 15% of polysilicon used in solar panels comes from Sichuan, and prices for the material were already at a decade-high on strong demand for clean energy. The extension of the electricity curbs will reduce supply and likely offer more support to prices of both polysilicon and lithium, Daiwa Capital Markets wrote in a note.

Jinko Solar Co., one of the world’s largest solar module manufacturers, said two of its plants in Sichuan have been affected by the power shortage, and said it was unclear when the units could return to full capacity. At least two polysilicon plants — run by GCL Technology Holdings Co. and Tongwei Co. — face production interruptions, the China Silicon Industry Association said last week.

The six areas suffering drought — Sichuan, Chongqing, Hubei, Henan, Jiangxi and Anhui — accounted for almost half of China’s rice output in 2021, Goldman wrote in a note. China’s agriculture ministry said over the weekend that high temperatures and unusually low rains since July have posed “a severe challenge” to fall grain production.

The ministry has asked local authorities to strengthen capital and resources investment to combat the drought, and properly allocate drought-resistant equipment and seeds. In Henan province, more than 15 million mu (1 million hectares) of crops have been affected, according to a CCTV report.

There’s also a demand boost for some sectors. Diesel purchasing is on the rise in Sichuan as industries seek alternative fuels. Local suppliers of diesel generators have already sold out after electricity rationing spurred some business owners to find alternative power supplies, industry consultant OilChem said in an online note. Some industrial users were loading diesel into barrels from retail stations, and demand has risen by up to 6%, it said.

The ongoing drought and power curtailments across a large swath of southern China compound economic woes for an economy already decelerating at an alarming pace, forcing the country’s central bank to cut its key interest rates last week.

Capital Economics believes more policy support is ahead, yet “it will probably be too late too little to prevent output from stagnating this year.”