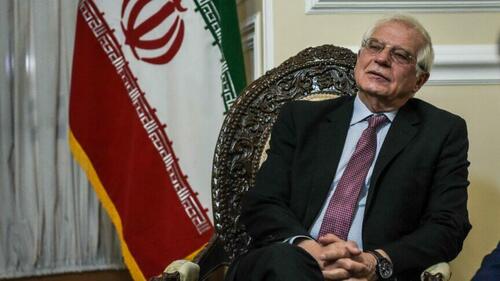 On Sunday the White House confirmed President Joe Biden is in serious discussions with Western leaders which have been involved in Vienna negotiations, as they are said to be weighing how to respond Tehran’s position on the finalized nuclear deal draft. However Tehran on Monday criticized Washington’s “procrastination” – in a new foreign ministry statement. It’s been one week since Iran issued its official response to a “final text”.

Strongly signaling a final decision is imminent, after Iran on Thursday suggested the ball is now in Washington’s court if it wants to get a restored JCPOA done, Biden spoke with heads of state representing signatories of the original deal, including French President Emmanuel Macron, UK Prime Minister Boris Johnson, German Chancellor Olaf Scholz (additional to these, Russia and China were also signatories).

The quartet of partner nations mulled the status of “ongoing negotiations” toward a deal and emphasized “the need to strengthen support for partners in the Middle East region,” according to the call summary, at a moment many fear regional allies like Israel and Saudi Arabia will see their concerns ignored and their security weakened as a result of restoring the JCPOA.

And the chief worry among Washington hawks continues to be that Biden is ready to compromise and throw close strategic allies under the bus. The administration is said to be busy seeking to calm Israel’s rising alarm.

Iran for its part, complained Monday that it’s still awaiting a response after issuing its approval for the text earlier submitted by EU foreign policy chief Josep Borell:

“What matters so far is procrastination from the American side on offering a response,” foreign ministry spokesman Nasser Kanani told reporters on Monday.

“We acted in time and we’ve always shown that we’ve acted responsibly” in the nuclear talks, he said.

Borrell told reporters Monday that, following a full week having passed since Iran gave its approval (with specific requests) to a finalized text, Tehran’s response was “reasonable”. He then said a final meeting could come within days…

“A meeting was scheduled to take place in Vienna at the end of last week, but it was not possible. It is possible that it could take place this week.”

This is perhaps the catalyst for Monday morning’s sudden slump in oil prices…. 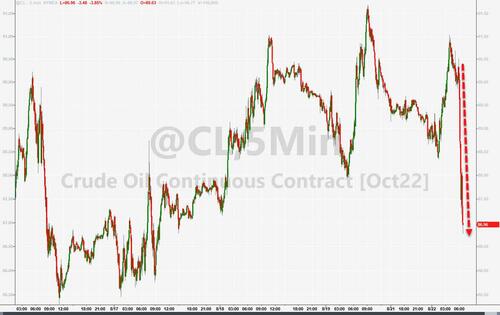 Crude quickly fell not long after the start of US trading as all eyes continue to be on a possibly ‘imminent’ restored Iran nuclear deal.

Day-to-day unusually drastic price swings continue amid daily contradictory Iran headlines and back-and-forth with the West. Commenting on extreme price fluctuation, OilPrice.com observes: “It appears, then, that volatility is only a good thing up to a point, and this point seems to be a daily price range five times the usual one. According to the Reuters analysis, between February 24 and August 15 this year, Brent crude’s daily range averaged $5.64 per barrel. This compared with $1.99 per barrel last year.”

…and the waiting game continues.