Europe’s electricity prices jumped to a new record high on Monday. The energy crisis worsened as top German officials said extending the life of the country’s last three nuclear power plants would do very little in resolving the energy crunch ahead of winter as Russia squeezes natural gas supplies.

German media outlet Deutsche Welle reported German Economy Minister Robert Habeck spoke at the government’s open-door day in Berlin on Sunday. The official said extending the lifespan of the three nuclear power plants would only save 2% of NatGas use.

It’s the “wrong decision given how little we would save,” Habeck said. However, he said extending the lifespan of the Bavaria nuclear plant could be an option because it would supply much-needed power to a major manufacturing hub that relies heavily on NatGas-fired power plants and has limited coal-fired plants and low wind production.

While this isn’t the first time the government downplayed the possibility of extending the lifespan of the plants, comments last week from the government denied a WSJ report that indicated a possible extension.

Chancellor Olaf Scholz was also present at the event and echoed a similar message:

“What worries me is that there is no ready answer to the question of what happens when gas runs out.

“If we were to make the decision to keep them running so that we make sure we don’t have a problem this winter, then it will only make a small contribution to solving our challenge, because it is only about electricity production.”

Bloomberg data shows that nuclear power generation in Europe’s largest economy has steadily declined since the 2011 meltdown at the Fukushima nuclear plant in Japan. 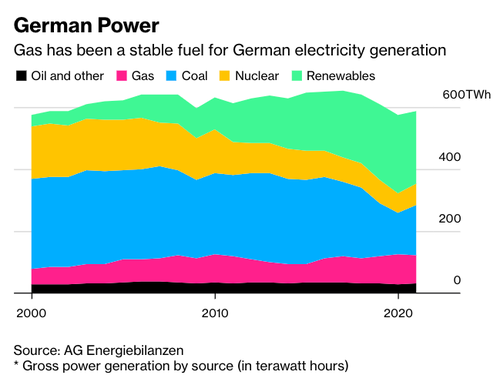 Germany has asked citizens to conserve NatGas and reduce power consumption. The latest data from the Federal Network Agency, the country’s energy regulator, show that NatGas storage is around 78% full.

A recent poll of Germans shows about 60% of them favor extending the life of the three nuclear power plants.

So it appears Habeck might only support the Bavaria nuclear power plant’s lifespan because it supplies critical power to factories.

Power prices are 14 times the seasonal average over the past five years. Even though nuclear is a small percentage, every little bit would help the energy-stricken country ahead of what’s expected to be a dark winter.

The major question is when EU leaders will wake up that they need Russia NatGas this winter season or risk high energy inflation that will spark socio-economic turmoil across the continent.