… Europe’s energy crisis has claimed another victim in the power-hungry metals industry, after Norsk Hydro said it planned to shutter an aluminum smelter in Slovakia at the end of next month, Bloomberg reports.

With Aluminum one of the most energy-intensive metals to produce, the closure of the Slovalco facility adds to growing signs of stress in Europe’s industrial economy as power prices surge to record highs. It’s why Hydro and others are now moving to shut down plants entirely. The region had already lost about half of its zinc and aluminum smelting capacity during the past year, mainly as producers dialed back output.

Hydro, Slovalco’s majority owner, said the closure was a response to adverse conditions including “high electricity prices, which show no signs of improvement in the short term.” The smelter was running at 60% of its 175,000-ton annual capacity and would suffer substantial losses if it continued operations beyond 2022, the Norwegian firm said. On Tuesday, Hydro said production at another aluminum plant in Norway would be impacted by a strike starting Aug. 22, adding to the strain on supplies. 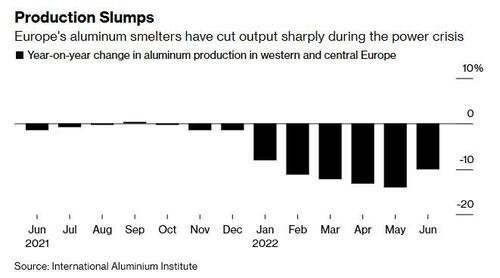 The news came one day after Zinc prices jumped after one of Europe’s largest zinc smelters said it too would halt production next month as the continent’s energy crisis threatens to hobble heavy industries.

The Budel smelter in the Netherlands – controlled by Trafigura Group’s Nyrstar – will be placed on care and maintenance from Sept. 1 “until further notice,” according to a company statement. Zinc trading on the London Metal Exchange jumped as much as 7.2% to the highest intraday level in two months as traders priced in even tighter supply.

Earlier this month, top zinc producer Glencore Plc warned that Europe’s energy crisis posed a substantial threat to supply. Smelters across the region are barely turning a profit and the Nyrstar plant, which accounts for about 2% of global output, has been operating at a reduced rate since the fourth quarter of last year.

The decline in European zinc production has seen local LME stockpiles fall close to zero this year, while global inventories remain near the lowest in more than two years. “There will be a bit of capacity juggling going on,” said Tom Price, an analyst at Liberum Capital. “If the EU needs their metal, they will probably have to import more semi-refined material or the metal itself.”

Europe’s energy crisis has sparked increasingly volatile trading on the London Metal Exchange, as traders assess a slew of supply losses against the rising risk that runaway inflation and tightening monetary policy will hammer demand for industrial metals in some of the world’s top economies. The collapse of hedging due to extreme volatility and illiquidity has not helped with the soaring volatility.

Slovalco will earn about 1.6 billion krone, or $165 million selling its hedges for power, metals and raw materials over the second half of the year, it said.

Industries from fertilizer to aluminum are being crippled by soaring energy costs as Russia squeezes gas flows to Europe following its invasion of Ukraine, flows which will only slow further following last week’s report that Nord Stream 1 will be shut down from Aug 31 to (at least) Sept 2. Benchmark power prices soared to fresh all-time highs this week as the worst energy crisis in decades looks set to persist well into next year.

As Bloomberg notes, the metals industry’s massive power requirements leaves it in the firing line as power prices surge and politicians push ahead with measures to cut energy usage over winter. Each ton of aluminum takes about 14 megawatt-hours of power to produce, enough to run an average UK home for more than three years. Production of zinc — which requires about 4 megawatt-hours of power per ton — is also under acute strain, with prices rallying sharply Tuesday after one of the region’s biggest smelters said it would suspend output next month.

“Inevitably, the high European power prices are starting to see more aggressive closures of energy-intensive metal production facilities,” Colin Hamilton, managing director for commodities research, said in an emailed note. “Many zinc smelters in Europe have been running below full capacity all year, but this is the first full closure at a major facility.”

Traders are also monitoring power issues in China, where Sichuan province – a significant aluminum hub – is rationing electricity amid soaring temperatures. China boosted exports in recent months to help plug the gap overseas, and a reversal in that trend could underpin prices even as risks to demand grow. 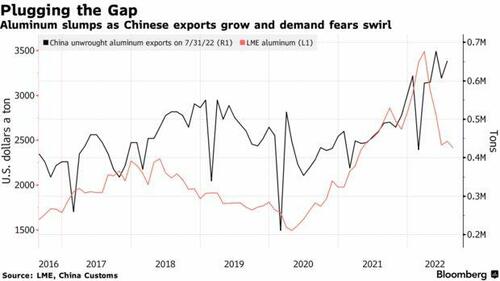