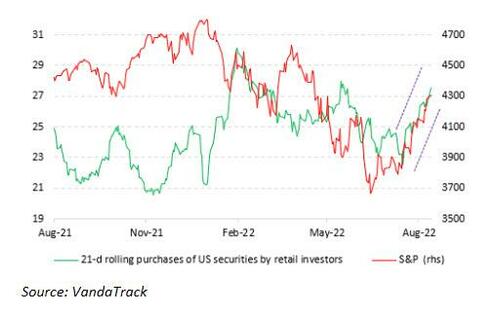 Whereas the past 3 days have seen a historic bloodbath among meme stonks such as GME, AMC and especially Bed Bath and Beyond, which saw 60% of its market cap erased in the three-day period as Ryan Cohen pulled one of the greatest ever pump and dump schemes in a company which is now set for bankruptcy, the sour mood is a stark reversal of the seemingly relentless retail buying which supported the rally’s momentum… until it hit the 200dma of 4,328 on Tuesday and then crumbled.

But while we will focus on the (latest) bursting of the meme stock bubble in a subsequent post, for now we are more interested in what happened during the bubble expansion phase, if for no other reason than to know what to expect the next time the WSB crowd inevitably crowds into a handful of quasi-insolvent high-beta, trash names.

As Vanda Research writes, retail investors purchased on average US$ 1.36BN/day worth of US securities in the week through last Wednesday, just before RC Ventures published its 144 warning it was about to dump its entire BBBY stake. While most purchases remained concentrated in a few tech companies – here TSLA once again is dominant – Vanda observed signs of a rotation back into ETFs as earnings season comes to a close. This also provided fewer opportunities for retail speculators to make quick intraday gains on earnings announcements. The WSB community also ramped up their participation – as seen by a dramatic increase in OTM call and cash buying of meme stocks to spark gamma squeezes – further supporting the current upward trend in US equities.

But what about the bigger question: does retail buying have an impact on the broader market? After all many skeptics have said that it is laughable to blame the meme stock melt up on mom and pop (or ape) investors, when it is really hedge funds behind all the notable meme stock moves.

Well, according to Vanda, the answer is yes.

In the days before the meme bubble burst, the research service notes that “the S&P 500 had jumped significantly during the US morning cash trading session, a sign of retail investors’ ability to boost markets.” Indeed, Vanda adds, its high-frequency data suggest that retail crowds were buying aggressively at the open recently. And similar to August 2020 when SoftBank single-handedly orchestrated a similar meltup targeting a handful of tech stocks, this August’s low liquidity and subdued engagement from professional investors amplified the impact of retail cash buying, even as the latter’s activity waned throughout the rest of the day (it’s also why Vanda warned that equities may see “more of a tug-and-pull in late August and September when most institutional investors return from their summer break”, although the pull came much sooner, courtesy of Ryan Cohen’s rug pull). An alternative VandaTrack dataset shows rising engagement in social media platforms, but while retail call option volumes have picked up but are below previous peaks. While speculative activity is far from the early 2021 peak – which was fueled by the latest round of stimmies –  the increase in social media chatter is experiencing exponential growth. Interestingly, broad call trading volumes have jumped. Still, they’ve remained subdued relative to previous speculative bouts – a sign that no all retail investors are ‘yolo-ing’ into some meme stock these days. Nevertheless, Vanda warns that “while this phenomenon may carry on as market action remains benign near-term, the strong positive momentum in meme-stocks is typically unsustainable in a long-term bear market. Indeed, retracements tend to be brutal, and we doubt the average investor can sustain that much more P&L pain in 2022.” The warning proved prudent with most meme stocks suffering blistering losses in the past 2-3 days. 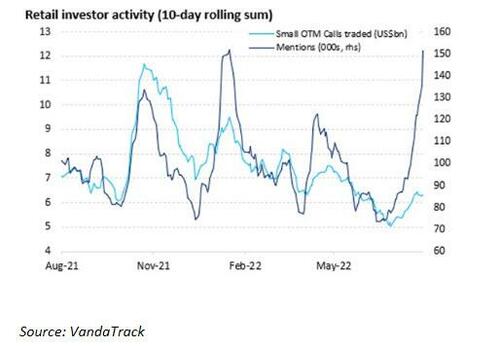 If retail impacts the the entire S&P500, it surely also influences cryptos, and sure enough Vanda notes that crypto land continues to keep investors on their toes, though trading activity shows investors are participating in nuanced ways. Earlier in August, Coinbase and BlackRock agreed to partner up to provide Aladdin clients access to crypto trading and custody via Coinbase Prime. The partnership would open the doors of crypto to a much broader set of institutional investors. Retail crowds did not miss the chance to gobble up a significant amount of COIN shares on the news, but as the chart below shows, upbeat sentiment in this particular name has lost some momentum. 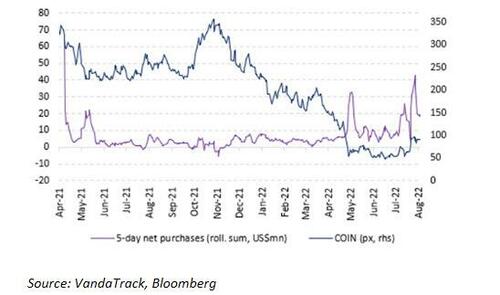