Here’s Why One Bank Is “Terrified” Into Friday 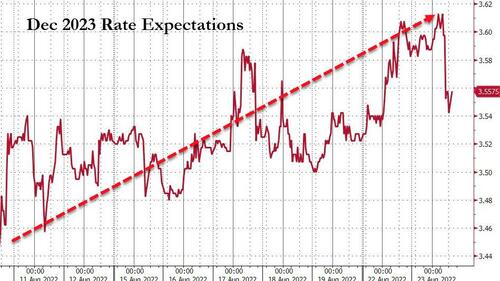 Aside from today’s dovish tilt (after this morning’s shitshow of data), the market has scrambling back into “hawkish” expressions over the last week…

This shift comes ahead of:

…while also, 2) the world watches the European / UK Energy crisis spin further out of control…

…and all while reports are that 4) the Biden Administration is a pre-midterm vote popularity push is going to pursue Student Loan forgiveness – a sizeable economic “Stimulus” at an eye-raising time.

Hence, as Nomura’s Charlie McElligott notes, another blast of “hawkishness” due to concerns that various inflation overshoot impulses around the world remain “structurally sticky” and will, in-turn, see global Central Banks forced to run “restrictive / higher for longer,” versus the premature capitulation from some into the “growth slowdown >>> Fed pivot” misinterpretation from July

Within the STIRS space, the Nomura strategist points out that we are seeing outright destruction of those fake-news “Fed pivot” trades across the front half of 2023… 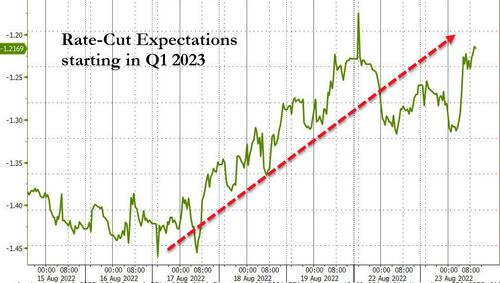 So now that we know where we stand – with a rather clear ‘hawkish’ setup into Jackson Hole, why is McElligott so terrified into Friday?

I’m scared of another Powell tilt in what may yet-again look like simply “stay the course” commentary on Jackson Hole, which will then be taken as “dovish” relative to increasingly EXTREME hawkish market expectations which are ratcheting aggressively higher, as per the aforementioned de-inversions in front 23 ED$ curves…because that’s the point: Powell rationally SHOULD BE “leaning-in” hawkishly now while Labor and Wage extremes are giving it to him, and work to tighten FCI again, in order to get the demand destruction he’s supposedly working to achieve.

But his M.O. in recent meetings or profile appearances has been a to come-off as “less hawkish” than the markets were anticipating / pricing into those meetings…where instead, his “balanced” tone has then led to a de facto “dovish impulse” which has (counter-productively) seen risk-assets rally and FCI ease

Not so tongue-in-cheek commentary:

if Chair Powell were serious about slaying the demand-side feeding into the inflation beast (with Jobs and Wages too hot, too low Reals, too easy FCI), he would 1) go up there with a ticking Ethereum crypto chart on his screen and 2) talk about the potential for a Terminal Rate above current market pricing until it cratered and Real Yields were +25bps on the day—problem solved

BUT INSTEAD (yikes), here is Rob Dent et al’s Jackson Hole preview, which I think captures said “high risk” that I’m concerned of, where anything less than heavy-handed hawkishness is instead “de facto dovish,” especially because the world is anticipating the opposite:

If what Rob anticipates above – that Powell will acknowledge “some pain” and rising recession risk, versus being light on forward guidance / doesn’t address market pricing of the Terminal Rate – this is gonna be flames for consensus into the speech.

And the fact that Rates traders have repositioned so aggressively “hawkish” yet again in STIRs (outright “Shorts” in SOFR and ED$s at highs, Net positions in SOFR / ED$ at lows, de-inversions in the prior 1H23 “easing” priced-in, Reals galloping higher again) and with Equities “FCI tightening trades” back all the rage (Momentum, Low Risk, Quality, Defensive Value leadership from above, while the Junk rally reverses and Secular Growth “Duration” Nasdaq leads lower again)….this perversely becomes the perfect set-up for the dovish face-ripper Friday IF Powell does NOT deliver, yet again. 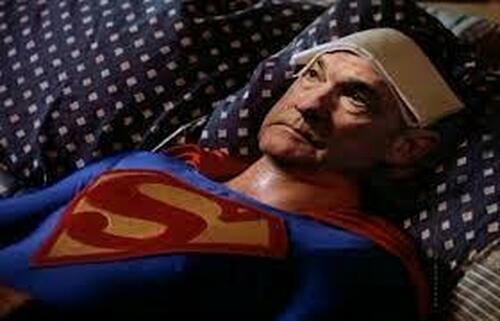 And so, McElligott suggests that tactical “Dovish” (Duration Equities & Bonds higher, USD downside) expressions via Options make sense here – because the market’s ability to seek and destroy consensus views for much of the year has been the one consistency.