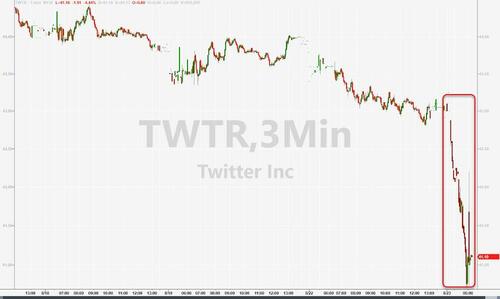 “We have already issued a subpoena for Mr. Zatko, and we found his exit and that of other key employees curious in light of what we have been finding.”

“We have already issued a subpoena for Mr. Zatko, and we found his exit and that of other key employees curious in light of what we have been finding.”

One day after Elon Musk’s legal team subpoenaed former Twitter CEO Jack Dorsey as part of an ongoing effort to fight a lawsuit by the social media company to force the billionaire to move forward with the $44 billion acquisition deal. The Washington Post released a new report alleging executives deceived federal regulators and the company’s board about “extreme, egregious deficiencies” to combat hackers.

WaPo cited a whistleblower complaint from the former head of security Peiter Zatko who said some of the company’s servers are running out-of-date software, and executives withheld critical information about data breaches. Bezo’s news outlet interviewed more than a dozen current and former employees about past deficiencies.

The complaint was filed last month with the SEC, DoJ, and FTC. It said thousands of employees had access to core company software, which led to data breaches and hacks of high-profile users.

The complaint noted Chief Executive Parag Agrawal was “lying” when he said in May the company was “strongly incentivized to detect and remove as much spam as we possibly can.”

In a WaPo interview, Zatko said his decision to reveal Twitter’s failures to the public is an extension of his previous work exposing security flaws within the company.

“I felt ethically bound. This is not a light step to take,” said Zatko, who was fired by Agrawal in January. He declined to discuss what happened at Twitter, except to stand by the formal complaint. Under SEC whistleblower rules, he is entitled to legal protection against retaliation, as well as potential monetary rewards. -WaPo

A company spokeswoman, Rebecca Hahn, told WaPo that Zatko’s allegations are “riddled with inaccuracies” and that “security and privacy have long been top companywide priorities at Twitter.”

Twitter also said Zatko was fired from his senior executive role at the company earlier this year for ineffective leadership and poor performance.

Regarding the allegations about spam bots, something Musk’s legal team is requesting documents from the company. Hahn said Twitter removes more than a million spam accounts every day.

Shares of Twitter dropped as much as 4.5% on the news.

This revelation could offer Musk an ‘out’ on the deal as he could claim the security flaws are a clear material adverse change to the company; and as opposed to just a lower price, this could terminate the deal entirely – benefiting anyone who didn’t want Musk to obtain the social media company.