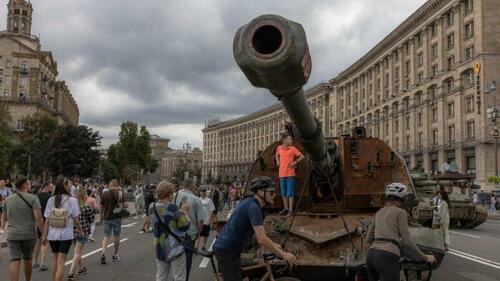 The US State department has issued an emergency alert through the US embassy in Kyiv on Tuesday warning that any remaining Americans must leave Ukraine immediately. The alert says that Russia plans to step up attacks on civilian infrastructure across the war-ravaged country.

“The Department of State has information that Russia is stepping up efforts to launch strikes against Ukraine’s civilian infrastructure and government facilities in the coming days,” the notification reads. “Russian strikes in Ukraine pose a continued threat to civilians and civilian infrastructure. The U.S. Embassy urges U.S. citizens to depart Ukraine now using privately available ground transportation options if it is safe to do so.”

This is concurrent with Ukraine’s Independence Day celebrations on Wednesday – except of course there won’t be much in the way of celebrations given the ongoing Russian invasion. A number of metropolitan areas are imposing strict curfews amid the danger and fears of expanded Russian strikes, and the need to avoid crowds in public places.

Events to commemorate Ukraine’s independence from the Soviet Union 31 years ago have been banned in the capital, as well as the country’s second largest city of Kharkiv, with President Zelensky and regional officials telling the public to stay home as expanded missile strikes are likely.

According to some of the city-wide alerts detailed in Forbes, “Authorities in the capital, Kyiv, have stepped up security, banned mass events and canceled major festivities like the parade down the main street—the street has instead been lined with captured and destroyed Russian military equipment—and other cities, such as Kharkiv, have extended overnight curfews.”

Kyiv announced that for people in the city “it is forbidden to hold mass events, peaceful meetings, rallies and other events related to a large gathering of people.”

Over the weekend, just hours after the assassination of Alexander Dugin’s daughter Darya Dugina outside of Moscow on Saturday, Ukraine’s Zelensky warned that “particularly ugly” attacks are likely coming.

“One of the key tasks of the enemy is to humiliate us, Ukrainians, to devalue our capabilities, our heroes, to spread despair, fear, to spread conflicts … Therefore, it is important never, for a single moment, to give in to this enemy pressure, not to wind oneself up, not to show weakness,” he said of expected increased Russian attacks on independence day.

Starting months ago Russian strikes began focusing on rail, transport, and power infrastructure in some key locales – which the Kremlin described as degrading Ukraine’s ability to transport Western supplied weaponry. Fears of even greater escalation also loom given recent attacks deep inside Crimea, which hadn’t happened during the opening months of the war.