By Philip Marey, Senior US Strategist at Rabobank

The 10 year US treasury yield climbed above 3.00% yesterday and EUR/USD dived below parity. However, futures markets are still pricing in a “Fed pivot” in May 2023, so there is still upward potential for yields and downward potential for EUR/USD.

Higher rates also meant lower stock prices and the S&P500 fell by 2.14% yesterday. Speculation about possible hawkish comments from Powell at Jackson Hole on Friday has been rampant. He is scheduled to discuss the economic outlook, but markets will be more interested in his outlook for the federal funds rate.

As we discussed in Lost in translation, wishful thinking by the markets has led to a much anticipated “Fed pivot” in the first half of next year. This stands in sharp contrast to the Fed’s own rate projections, published in June, which are still valid as Fed Chair Powell stressed at the July meeting of the FOMC. The rate projections show an increase of the federal funds rate to 3.4% by the end of this year, followed by a further increase to 3.8% by the end of next year. At the time of writing, Bloomberg’s WIRP indicated a federal funds rate of 3.59% by the end of 2022, followed by a 3.74% peak in March 2023, and then a decline to 3.39% by the end of 2023. Perhaps markets are mistaking the Fed’s data dependence since June for a Fed pivot early next year, but Powell clearly stressed in July that the FOMC prioritizes price stability over full employment. He emphasized that price stability is a pre-condition for sustainable employment growth. Consequently, as long as inflation remains well above target, the Fed will keep the federal funds rate above neutral, even if the unemployment rate starts to rise. In fact, this is also made explicit in the Fed’s Summary of Economic Projections. 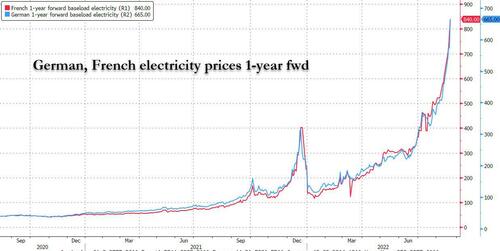 On the data front, Monday was relatively quiet. In the US, the Chicago Fed National Activity Index (CFNAI) rebounded to 0.27 in July from -0.25 in June (upward revision from -0.19). This index is based on 85 indicators of national economic activity and a zero value indicates trend growth. So the CFNAI moved from below trend growth in June to above trend growth in July, which suggests that the US economy has rebounded from the weak first half year that has been characterized as a technical recession. Although encouraging, the almost 30 bps inversion of the 2-10 segment of the US treasury yield curve suggests that an NBER-approved recession is only a matter of time. After all, this is well above the 16 bps threshold that we discussed in Inversions and recessions.

Today, S&P Global will publish a range of manufacturing and services PMIs for August. They kicked off with the French PMIs. The manufacturing PMI feel to 49.0 in August from 49.5 in July and the services PMI declined to 51.0 from 53.2. In other words, the French manufacturing sector continues to contract, while the services sector is still growing, albeit at a slower pace. However, combined this was sufficient to push the composite PMI into contractionary territory, to 49.8 from 51.7. Hence S&P Global’s press release is titled “French economy contracts in August for the first time in a year-and-a-half.” At the time of writing, we were also looking forward to the German PMIs, the Eurozone PMIs, and the UK PMIs.

This morning we get S&P Global’s manufacturing and services PMIs for the US. The Bloomberg consensus expectation is a rebound in the services PMI to 49.8 in August from 47.3 in July, which would take the index from contractionary territory close to the neutral level. In contrast, the manufacturing PMI is expected to decline to 51.8 from 52.2, thus still seen to remain in expansionary territory.

US new home sales are expected to show a further decline of 2.5% in July after a 8.1% drop in June. As we explained in Technical recession, the interest rate sensitive housing sector is the first to feel the impact of the Fed’s hiking cycle, after a strong increase in mortgage rates. This led to a 14% decline in residential investment in the second quarter of the year.

Finally, Eurozone economic confidence is expected to fall further to -28.0 in August from -27.0 in July. Note that these levels are even worse than during the outbreak of COVID, when the index reached its trough at -24.5 in April 2020. And this was already below the levels of the Global Financial Crisis (-22.4) and the Eurozone sovereign debt crisis (-21.4).