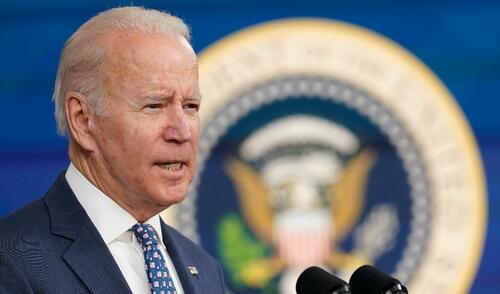 President Biden on Wednesday is expected to announce the cancellation of up to $10,000 in student debt for millions of American borrowers who earn less than $125,000 per year, and $20,000 in debt for Pell grant recipients, according to Bloomberg, citing people familiar with the matter.

The administration will also pause student loan payments for four more months through Dec. 31, with sources indicating that it would be the “final pause” backed by Biden (the 7th since the Covid-19 pandemic began in March 2020) – just in time for midterms.

In keeping with my campaign promise, my Administration is announcing a plan to give working and middle class families breathing room as they prepare to resume federal student loan payments in January 2023.

The plan will cost between $300 billion and $980 billion over 10 years, while the majority of relief will go to borrowers in the top 60% of earners according to an analysis by Penn Wharton.

According to Goldman, it’s a middle and upper class hand-out.

The Penn Wharton budget group, run by a former George W. Bush Treasury official, estimated that: “between 69% and 73% of any debt forgiven would accrue to households that rank in the top 60% of the US’s income distribution,” (via Bloomberg).

In recent weeks, Biden administration officials have been discussing forgiving a higher amount of debt for low-income borrowers who received Pell grants. Previous discussions included forgiveness for Americans who made less than $150,000 in the previous year, or $300,000 for married couples filing jointly.

The issue has sharply divided Democratic lawmakers and policy experts who are influential in the administration – with advocates saying Biden should fulfill a campaign promise, and critics who are concerned that it will exacerbate inflation while mostly benefiting high-income college graduates who don’t need the help.

During his 2020 election campaign, Biden urged Congress to forgive $10,000 in student loan debt – while far-left lawmakers such as Elizabeth Warren, and advocacy groups such as the NAACP, have pressured Biden to push for at least $50,000 in forgiveness.

Goldman Sachs found “would discharge around $300bn (1.2% of GDP) of debt but would boost consumption by less than by less than 0.1% of GDP over the year following implementation.”

Warren: “Of course not.”

“So you’re going to pay for people who didn’t save any money and those of us who did the right thing get screwed.”pic.twitter.com/Z19hR5Vsdg