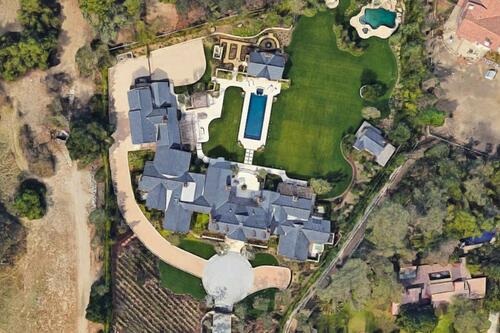 Hollywood celebrities like to lecture average Americans about how they need to change their lifestyles to fight climate change. But many of these A-list celebs who preach Greta Thunberg’s gospel of saving the planet often fail to live the eco-friendly lifestyles they advocate.

Last month, we revealed that Taylor Swift, Steven Spielberg, Kim Kardashian, and Oprah Winfrey, some of whom are so-called ‘climate activists,’ were top on the list of private jet polluters.

Another list of elite Hollywood celebs has emerged this week as the water police in Los Angeles County have served them with repeated violations as serial water wasters.

Axios spoke with Virgenes Municipal Water District spokesperson Mike McNutt who said Kim and Kourtney Kardashian (serial climate offenders), Kevin Hart, and Sylvester Stallone are among the 1,600 people who have exceeded their monthly water budgets by 150% at least four times more than ordinary people in Southern California, who are forced to take shorter showers, banned from watering their yards, and unable to wash their cars.

Hollywood A-listers appear to live in a two-tier society where they don’t have to play by the rules and are hypocrites in helping the environment.

At least readers have an understanding of the hypocrisy of Hollywood elites. It’s okay if the Kardashians fly around the world in their private jets and have lavish pool parties, but frowned upon when average Southern Californians want to water their parched front yard.

This reminds us of a quote from the late George Carlin at the Beacon Theater in 2005, who famously said:

“They don’t want well-informed, well-educated people capable of critical thinking. They’re not interested in that. That doesn’t help them. That’s against their interests. It’s a big club, and you ain’t in it.“

Yet more examples of reality where elites don’t have to play by the rules.