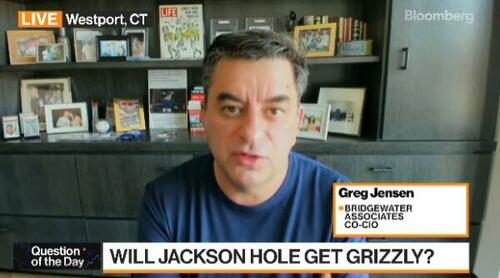 The Fed faces a “tough dilemma”, warns Greg Jensen, co-CIO of Bridgewater Associates, noting that they are going to have to keep raising rates despite the fact that the economy is slowing.

“On the margin, that’s bearish,” Jensen notes, because while commentators (and Fed Speakers) argue that The Fed will have to tighten more than they have (and that you “shouldn’t fight The Fed”), “the markets don’t reflect that.”

And as we noted earlier, financial conditions (reflecting market-implied expectations) are now easier than when The Fed started hiking rates… 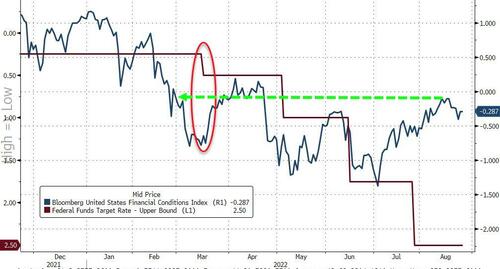 The CIO of the world’s largest hedge fund notes that market conditions “reflect inflation falling quite dramatically towards The Fed’s target over the next 18-24 months, [as well as expectations that this decline] will occur in a relatively stable economy.”

As an example of this delusion, Jensen notes “stock market earnings expectations over the next decade haven’t come down at all this year, despite the decline in the equity market… it’s not at all a function of the view on earnings.”

What this means is that in the longer-term, there will be a drying up of liquidity under Quantitative Tightening, and

“The reality that starts to set in will be that inflation is more stubborn, The Fed tightens longer, that the expected easing in the next 6-9 months doesn’t materialize, and at the same time profits and economic growth are weaker than people expect is going to make this a tough road for all assets.”

When asked what needs to be done, Jensen noted that “continuing to raise rates and quantitatively tighten will work, but unfortunately this will drive down inflation and the economy together, with inflation being more stubborn.”

This means that we will get “higher interest rates across the curve and asset values declining generally.”

In fact, “in aggregate, the asset markets will decline from 20% to 25%,” he said in the interview with Bloomberg Television.

Worse still for stocks, Jensen added that “we are still something like 25-30% above the normal relationship between cash-flows and asset prices which means there’s a significant decline to come to align the real economy with the financial economy.“

The bottom line from all this, he notes is, that “you are not going to be able to totally avoid this.”