Authored by Irina Slav via OilPrice.com,

Natural gas prices in the United States hit the highest in 14 years this week, with the Henry Hub benchmark temporarily topping $10 per million British thermal units. And demand is not going down anytime soon.

The United States has emerged as the biggest supplier of natural gas to troubled Europe, as the latter first slipped into a gas crunch after demand outstripped supply last year. Then it slapped seven packages of sanctions against Russia—its main supplier—for its invasion of Ukraine.

U.S. gas, liquefied and transported to the LNG import terminals in Europe, has been instrumental in filling up Europe’s gas storage caverns ahead of schedule. At the same time, it has highlighted Europe’s vulnerability in the gas supply department: it has virtually no alternatives to U.S. gas, and this has pushed its gas bill ten times higher than what European countries normally spend on gas.

The vulnerability was also highlighted by the production outage at Freeport LNG, which supplies about a fifth of U.S. LNG and which has now said it will not restart production before November. Prices continue higher.

“Virtually all of our fundamental and technical indicators continue to flash green lights toward higher price levels,” Ritterbusch & Associates said in a note cited by the Wall Street Journal earlier this week.

The trading firm also said that U.S. natural gas prices could climb further up as well, close to $12 per million British thermal units in the not-too-distant future.

Meanwhile, Reuters reported this week that LNG prices in Europe had hit a record discount to the European benchmark: the TTF hub in the Netherlands where the gas gets delivered. A discount normally sounds like good news, but this time the discount was the result of a sharp surge in TTF prices after Gazprom said it would be shutting down Nord Stream 1 for unplanned maintenance of its one remaining compressor.

[ZH: For context, EU NatGas is trading at around $500/barrel oil equivalent – around 3x the price of US NatGas…” 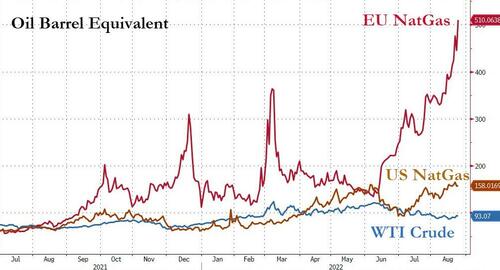 Yet because of the surge in U.S. natural gas exports to Europe, U.S. gas prices have become a lot more vulnerable to various events, too. Just this week, the news about the delay in the Freeport LNG restart pushed U.S. gas prices down by 5 percent. The longer-term outlook, however, remains bullish.

Earlier this year, investment firm Goehring & Rozencwajg forecast that U.S. natural gas prices were about to take off after European ones before too long. The reasons for the surge were overall tight gas supply and U.S. producers’ new central role as biggest suppliers to Europe. Also, Goehring & Rozencwajg predicted U.S. gas production was nearing a plateau.

“Asian and European natural gas prices stand at $35 per mmbtu, versus $8.20 per mmbtu here in the United States. Given the underlying fundamentals that have now developed in US gas markets, we believe prices are about to surge and converge with international prices within the next six months,” Goehring & Rozencwajg said in May.

This week, Asian LNG prices started the week at some $60 per mmBtu, while European prices for October LNG cargos traded at a little over $60 per mmBtu. This is an almost twofold increase from May, and prices are unlikely to go back down as the race to secure enough gas for the heating season heats up.

This means domestic U.S. gas prices will remain under upward pressure, too, and that will last for a while as well. Reuters reported this week that U.S. producers of liquefied natural gas had closed contracts for the delivery of some 48 million tons of LNG in total, which would lead to an increase in total LNG exports of as much as 60 percent if all planned new terminals are built.

Meanwhile, because there are not enough LNG export terminals to satisfy current demand, gas inventories in the U.S. are on the decline, and it might turn out yet that Goehring & Rozecwajg were right, despite an uptick in gas production.

“We are beginning to see a lag in storage builds that could lead to a precarious situation during the draw season in the event of a harsher-than-expected winter,” Neal Dingmann, energy equities analyst at Truist Securities, told the Wall Street Journal.

“There is potential for a winter U.S. superspike.”

A superspike in gas prices in the U.S. will be really bad news, and not just for the U.S. itself. Europe literally depends on American liquefied gas as it seeks to sever all trade ties with Russia.

But if gas prices rise too high in the U.S., export curbs may be in order as gas is still widely used in the U.S. for electricity generation, and no one wants voters with sky-high electricity bills ahead of the November midterms. And this means Europe will be left in the ditch with not enough gas to last it through winter. For prices, the sky will be the limit.