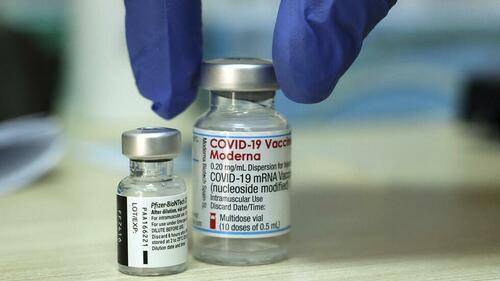 Moderna announced on Friday that it’s suing rivals Pfizer and BioNTech SE, claiming that the mRNA technology in their Covid-19 jab infringes on its patents.

The lawsuit, filed in the US District Court in Massachusetts as well as in Germany, seeks unspecified monetary damages for patent infringement, and sets the stage for a massive legal battle between the three vaccine makers.

In a Friday statement, the Cambridge, Massachusetts-based Moderna accused partners Pfizer and BioNTech of violating key mRNA patents in the development of the Comirnaty vaccine. The company says it had patents from 2010 to 2016 on mRNA technology which made its Spikevax jab possible, which the other two companies copied without permission.

Moderna said it’s not asking the courts to pull the Pfizer-BioNTech Covid vaccine from the market nor to block future sales. The company is seeking damages for the period starting March 8 of this year and says it will not seek damages for Pfizer’s sales to 92 lower- and middle-income countries. Early in the Covid crisis, Moderna promised not to enforce its intellectual property during the pandemic, but on March 7 it modified that pledge to apply only to lower-income countries, essentially making this litigation possible. -Bloomberg

“We are filing these lawsuits to protect the innovative mRNA technology platform that we pioneered, invested billions of dollars in creating, and patented during the decade preceding the Covid-19 pandemic,” said Moderna CEO Stephane Bancel in a statement.

The lawsuit is the latest – and undoubtedly will be the largest – within the industry. Earlier this year, Alnylam Pharmaceuticals sued Moderna, Pfizer and BioNTech over lipid nanoparticle technology used in both of their Covid vaccines, while Moderna has been in a legal battle with the National Institutes of Health (NIH) over whether agency scientists should be listed as inventors on their jab.

In their lawsuit, Moderna says Pfizer and BioNTech had other options but “decided to proceed with a vaccine that has the same exact mRNA chemical modification to its vaccine” as their treatment. It also accused the pair of copying its method of encoding a full-length spike protein in a lipid nanoparticle.

They can sue one another but we can’t sue them.