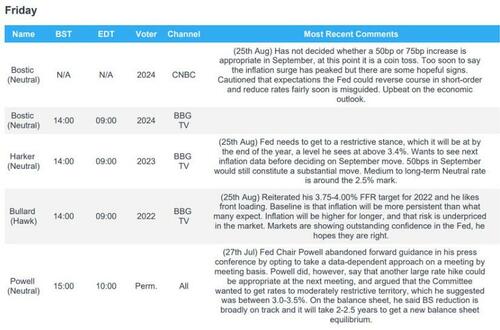 Here is your last minute Jackson Hole preview, courtesy of Newsquawk and Goldman.

FOCUS: Chair Powell’s speech at the Jackson Hole symposium Friday will be gauged for clues on the Fed’s rate path after the July FOMC and minutes saw the case made for a slowing of the pace of tightening – a case strengthened after the softer-than-expected July CPI and PPI data. 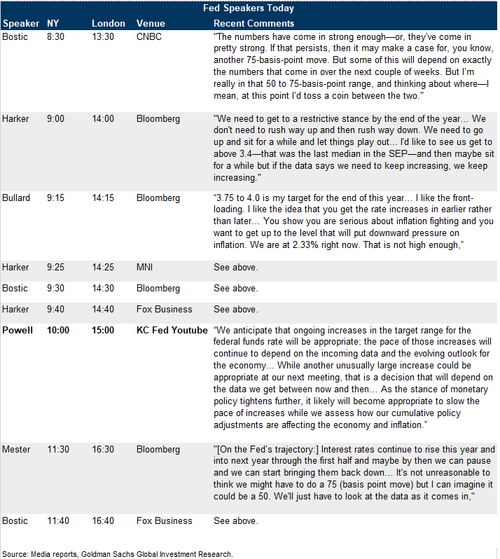 HIKE SIZE: A focal point will be guidance on the size of the rate hike at the September FOMC, with markets priced between 50bps and 75bps, but Powell will likely refrain from any explicit guidance, with the Fed chair will likely continue to frame the central bank’s reaction function on incoming data; ahead of the September gathering, data releases include August’s CPI, NFP, and ISM. Powell can be expected to reaffirm the Fed’s commitment to price stability, balancing that message against its guidance for a reduction in the tightening pace.

HAWKISH TILT: There has been chatter that Powell will look to affirm hawkish signalling after the July FOMC and accompanying minutes saw some balanced comments, noting a risk of overtightening, which saw a subsequent easing of financial conditions as markets priced a greater likelihood of a Fed ‘pivot’ and moved away from 75bps September hike pricing.

PREVIEW FROM NICK TIMIRAOS AT WSJ: “They are likely to weigh whether to raise rates by a half-point or 0.75 point at their next meeting, Sept. 20-21, after achieving consensus this summer that rates would need to reach levels that slow the economy’s growth to dampen investment, spending and hiring. Mr. Powell isn’t expected to deliver a strong argument for either option, analysts said, because the central bank has said it is being guided by coming data on inflation, growth and employment.”

QUICK THOUGHTS FROM GOLDMAN TRADER RICH PRIVOROTSKY:  “Think in a lot of ways the market has pre-traded a not as hawkish as feared Powell. Felt like the bar was simply set too high and Powell in his usual measured/balanced approach may not be able meet the markets expectations for a hawkish anti-inflation message. Still of the view that it will be difficult for him to be “hawkish enough” to emphasize the need to tackle inflation while removing the conditionality he injected at the July FOMC. Rightly or wrongly by removing forward guidance the markets interpretation put incrementally more emphasis on the pace of economic growth relative to inflation compared to where it had been ex-ante. To put the toothpaste back in the proverbial tube he will have to be closer to the George comments yday “We have to get interest rates higher to slow down demand…We want financial conditions to tighten along with the direction we are moving around policy,”. Anything short of that probably means dollar lower and equites higher knee jerk but again the risk is far less asymmetric after the last two days of equity strength. It’s been prudent to head into this event with powder dry, think little chance the Fed chair is actually dovish it’s just a question of if he is hawkish enough? Hence rallies still are meant to be faded especially in the context of a.) lack of cta demand (asymmetry all to the downside and b.) any further rally in equites and fixed income will only increase pension rebalancing into end of month.”

RECENT MINUTES: While the Fed will have found the market reaction to the minutes as unhelpful, it’s worth noting that easing has already pared – Fed Speak in wake of the minutes has looked to push back on dovish expectations. Furthermore, given the dip in the August Flash PMIs and other US survey data, Powell could be cognizant not to “over hawk” the speech as economic leading indicators begin to turn, with housing data already seeing notable declines.

MARKET PRICING: Current market pricing, as of August 24th, has a 75bps September hike c. 60% priced in vs 40% for 50bps, whilst year-end Fed Funds are priced at 3.62% with the terminal rate priced at 3.79% in March 2023. On how the market could react, SGH Macro’s Tim Duy believes, “market participants would like to take on a solid, one direction trade as they return from summer breaks, and if they want to focus on the hawkish messaging, they can take short term rates higher.”

TERMINAL: Additionally, traders will be looking for any views on the terminal rate; more specifically, where officials estimate it is (the June SEP forecast 3.75-4.0%; markets priced in the 3.75-4% range), when we will get there (before the end of the year is possible), and how long will the Fed be able to hold rates at terminal as they claim they will. BMO Capital Markets offer us some historical context, noting that the Fed has typically stayed at terminal for between 3-15 months, with the average being around 6.5 months. The upshot is that if terminal is achieved by year-end, it could imply a rate cutting cycle will begin in H2-2023.