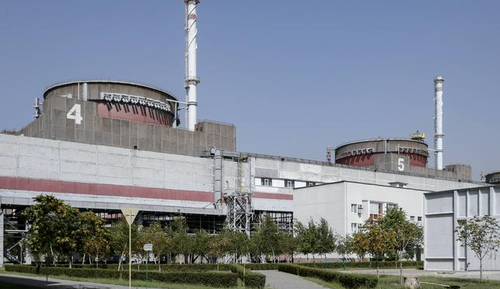 A Friday statement by Ukraine’s Nuclear Energy Generating Company Energoatom confirmed that “Today, on August 26, 2022, at 14:04, one of the Zaporizhzhia NPP’s reactors, which was stopped yesterday, has been reconnected to the power grid. It is building up capacity.”

This after multiple instances of damage to transmission lines resulted in the entire plant being disconnected from the energy grid the day prior (which is a first in the plant’s history), reportedly the result of fires which comes amid ongoing fighting and shelling. Some 500 Russian troops have controlled the complex since March, but it has continued supplying electricity to Ukraine, though some temporary regional blackouts were reported this week.

There were reported temporary disruptions into Thursday based on the hours-long power grid stoppage to the plant, signaling an increasingly dangerous and potentially volatile situation at the site.

In a Thursday night address to the nation, Ukraine’s President Zelensky said, “I want to assure all Ukrainians: We are doing everything to prevent an emergency scenario.” He added: “It depends not only on our state. The key thing is that international pressure is needed to force the occupiers to immediately withdraw.”

He went further to say that Europe is facing a “radiation disaster”: “The world must understand what a threat this is: if the diesel generators hadn’t turned on, if the automation and our staff of the plant had not reacted after the blackout, then we would already be forced to overcome the consequences of the radiation accident,” Zelensky said in the televised speech. “Russia has put Ukraine and all Europeans in a situation one step away from a radiation disaster.”

However, at this point, Bloomberg is citing Energoatom to summarize the current status as follows:

There are no immediate safety concerns and the Zaporizhzhia Nuclear Power Plant is being powered through a restored electricity line, Ukraine’s state-owned nuclear operator Energoatom said. Transmission lines from the plant have also been repaired, while one unit was also reconnected to the country’s grid, supplying electricity to the system, it said. After Russia seized the plant, two units out of six were operating.

The report also reviews that even amid the current standoff, there are multiple layers of safety systems in place:

Nuclear power plants operate with multiple layers of safety systems. Zaporizhzhia has several high-voltage cables connecting the station to Ukraine’s electricity grid. A large substation at the complex can also convert power generated from the plant into electricity used for cooling systems. The last line of defense is diesel generators that can be used to prevent a meltdown.

Yet it very obviously continues to be a precarious and highly unpredictable situation, with an IAEA team said to be arriving to inspect the plant within the coming days.

For the first time in history nuclear plant was stopped because of war.

If Zaporizhzhia plant isn't connected to the grid again, another Fukushima or Chernobyl can happen

Immediate demilitarization of 30km zone around plant must take place.

If not, Rosatom must be sanctioned. pic.twitter.com/65u39s9lR9

The earlier power disconnection was reportedly due to fires as nearby ash pits, which Energoatom in its initial statement on the crisis blamed on Russian forces: “The actions of the invaders caused a complete disconnection of the ZNPP (Zaporizhzhia nuclear power plant) from the power grid – the first in the history of the plant,” it stated.

If saner minds prevail, this situation alone is reason for all parties to pursue ceasefire talks at the same table as urgently as possible. But at the moment the possibility looks ever more distant, based on the prevailing rhetoric.