Is There A Trophy For Calling The Turn? 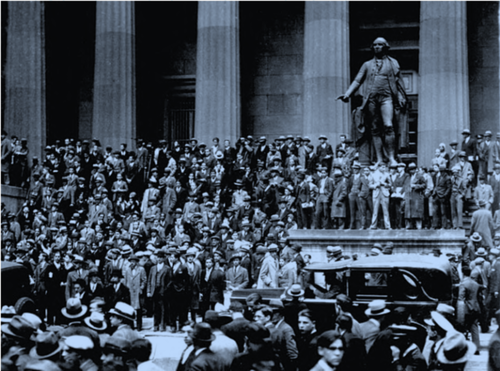 Authored by Kane McGukin via BombThrower.com,

When it comes to markets, there’s an extreme fascination with timing the exact top or bottom; a sense of pride, for being that guy who ticked the top or nailed the drop.

Crowd gathers on the sub-treasury building steps across from the New York Stock Exchange in New York on “Black Thursday,” Oct. 24, 1929

Every investor becomes a trader at some point.

Chasing that tale, so they can tell the story of the time they got perfectly in or out of the market.

What’s lost in the hunt for perfect timing, is the realization that it’s less about, “what price did you pay or sell at?” and more about, “what percentage did you allocate?” The reason being, money is not static. There’s a need for it to always be flowing somewhere: to expenses, to investments, to others, etc. By chasing price, there’s a higher probability of your money flowing to another market participant’s wallet.

So, when we look at a market like Bitcoin, or anything for that matter, what does capitulation look like?

Well, it looks exactly like it has in markets for nearly a century.

To help paint the picture, I’ll refer to an old text: “Tape Reading & Market Tactics”, by Humphrey B. Neill. A text originally written in 1931 and updated in 1959 and 1970. Tape reading is a lost art but still present in some ways. It’s an understanding of prices and what they tell you about the psychology of the market.

“Heavy volume at the end of a move is extremely important, inasmuch as it generally indicates a turning-point in the market. … increasing activity of transactions at the top without stocks’ making further headway. … extreme activity near and at the top is indicative of a substantial reaction to follow. This is true, likewise, at the bottom.”

As markets move towards major turns at the top or bottom they get wild and euphoric, which is accompanied by increasing activity and volume. It’s when prices stall and fail to continue with the increased volume that you find the top or bottom. To gauge the market’s temperature, one must look past the noise of headlines, and watch to see if price and volume are aligned or are diverging.

“During the rally, what has been going on? Two things: first, the buying of stocks by those who are covering their previous short sales; and, second, new buying by those who expect the advance to continue. Both factions are spending their money to purchase something; but one faction is closing out a transaction, while the other is entering one. The man who covers his short position is in a greater hurry than the long buyer. The short seller will rush to cover if he believes that the rally will endure for some time. … You would also like to determine whether there are many more Smiths than Joneses – more short-coverers than long buyers — because if the rally is due mainly to short-covering it is likely to be brief, and may be followed by further declines. How can you tell which it is? Watch the volume and, in this situation, the rapidity of price changes.”

As it relates to Bitcoin, we know that there’s been a liquidity crisis. Many crypto exchanges, lending firms, and hedge funds are playing hot potato trying to figure out who actually has the collateral? Who borrowed it? Who lent it? And, who leveraged it?

We know that traditional hedge funds have been shorting Bitcoin as a hedge to QQQ (an odd thing to do in my opinion, but they have been). There’s a mountain of pressure to the downside. There are short sellers in the market.

“(By ‘good buying’ is meant purchases made by those who are in a position to know the underlying conditions of the market, and also the buying done by those who are sponsors of certain issues.) You notice large blocks of stocks taken at steadily rising prices. At intervals, the market becomes quieter … very little weakness apparent … there are few huge blocks frequently changing hands at lower prices.”

When “good buying” begins it’s done by professionals, those who understand the landscape and the dynamics that have caused the drawdown. They have the capital to support prices to a point where the market weakness can’t, or has trouble pushing through the capital they are buying with. In these times, you’ll also notice that the speed and frequency of price declines will begin to slow.

“In the event that the unexpected happens, and volume increases at lower prices, it would be well to sell your trading-holdings at once and stand aside. A further increase in volume in the downward direction will wipe out the rally, and we are back where we started from. … But do not argue with the tape. Find out whether the buyer is stronger than the seller, or the opposite, and act accordingly. Volume will give you your answer. … …At the turn, some stocks may soar into new highs (or may make new lows, if the downward trend is about to be reversed), but the majority are simply traded in heavily without gaining or losing ground. … If a major turning-point is imminent, study the action of the second- and third rate stocks. They may give you early confirmation of the reversal. For example, in 1929 the inactive stocks began their decline some weeks ahead of the market leaders.”

It’s the weak stocks that lead the way. The frothy, high growth or “junk” names that pop late stage – and also falter sooner than larger, sturdy names, as investors begin to dump risk and seek safety.

“The public is attracted by price-changes, not by volume; that is to say, the public does not analyze the action of volume. It is prior to and during these final stages of a move that the professionals and pools unload their stocks on the inexperienced. The unwary, having seen prices advance steadily with only minor set-backs, misinterpret the feverish activity and buy heavily – which is just what the professionals want. In fact, pool-managers operate upon this human weakness and engineer rapid run-ups of prices, knowing that thousands of traders and buyers will be attracted by this activity. Volume increases tremendously at these points, and newspapers carry front-page stories.”

Deep-pocketed investors unload into strength, while smaller investors fomo in. The same is the case on reversals and at points of capitulation. As markets begin to unwind, those with capital come in and support prices, as weak hands are washed out.

“…ear-marks of a ‘clean-out’ of a temporarily oversold condition. … a terrific churning of stocks, little headway was made for approximately three hours. There was no progress on heavy volume. That was our signal.”

The key to watch for when it comes to capitulation, is prices stalling as volume and frenzy is picking up. If an increase in activity can’t push prices further, then it is most likely that the tide is beginning to turn.

CODA: WHERE ARE WE NOW?

Bearing in mind that this is not financial advice, and it’s still too early to tell in any case: In June we did see some uptick in volume into the lows of the Bitcoin price, although it wasn’t significant, when looking at it on weekly and monthly charts. 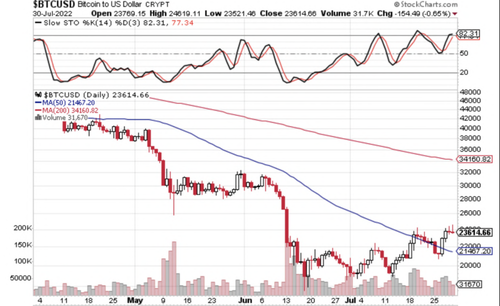 For a confirmation of a trend change we would need to see Bitcoin trade and stay above $32,000 USD on heavy and or persistent volume to show that the buyers have regained control.

(Today’s post was adapted from a previously published note to The Crypto Capitalist Letter premium subscribers by Kane McGukin, who publishes The Mesh Point Substack).