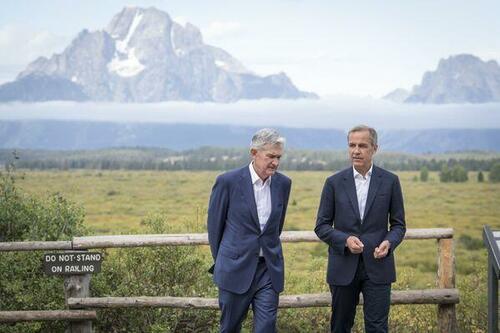 For those waiting in anticipation of a sudden central bank reversal on interest rate hikes or full capitulation and a return to stimulus, you might be holding your breath a while longer.

A host of central banking heads from around the world delivered a unified message of hawkish intent on Saturday at the Kansas City Fed’s annual retreat in the Grand Teton National Park in Wyoming.  The heads of the Bank of England, Swiss National Bank, Bank of Japan, Bank of Korea and several European Central Bank policy makers delivered remarks that sought to unequivocally commit to raising interest rates until inflation meaningfully slows.

This trend follows statements made by Fed Chairman Jerome Powell on Friday which have led 60% of market investors to place bets on another rate hike of 75 basis points in September.

The continued hawkish tone of central bankers flies in the face of previous predictions by many economists that rate hikes and balance sheet cuts would be short lived and that bankers would seek to avoid market turmoil at all costs.  This has not been the case, and while considerable attention has been on the Federal Reserve, other central bank policy makers including those at the ECB are also calling for 75 bps rate hikes in September.

The rate hike conundrum is widely understood among alternative economists but rarely discussed in the mainstream.  Central banks have engaged in a non-stop program of QE, stimulus measures and near zero interest rates for well over a decade since the credit crash of 2008.  Now, stock market, bond markets and many other elements of the global economy are addicted to easy money derived from central bank fiat.  Without the printer and digital money creation running non-stop, there is no lifeline for massively indebted corporations, nor will there be cheap overnight loans to support corporate stock buybacks.

These policies have kept many nations and stock markets on financial life support for years, but they have also created the detrimental price inflation the public is now suffering under today.  Thus, a Catch-22 scenario has been engineered – If the central banks cut off the easy money and raise interest rates, corporations will lose their lifeline, stock buybacks will plunge, markets will fall and unemployment will rise.  If the central banks continue with stimulus and low rates, inflation will only climb higher.

So far it would seem that central bankers are choosing market instability and job losses over more inflation and they have given no indication they plan to reverse course for months to come.