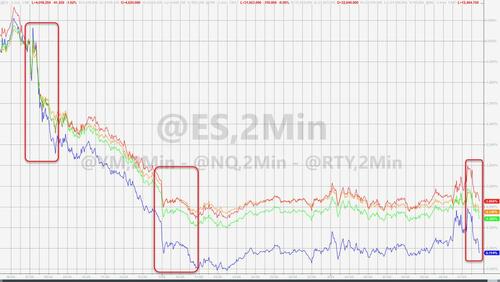 Update (1100ET): US equity markets have taken another leg lower this morning after a brief attempt at a bounce. The Nasdaq is now down over 5% from the start of Powell’s speech…

And The Dow has broken back below its key 50DMA…

As we detailed earlier, there’s a lot lower to go as rates reality hits stocks.

As stocks soared for the last few weeks – supposedly on semantic and self-reinforcing dovish sentiment heard in Powell’s post-FOMC presser – a funny thing happened in the actual market that trades rate-trajectory expectations… NOTHING! 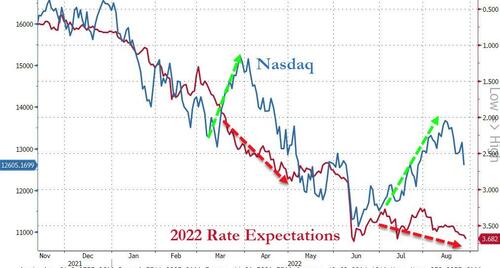 That’s right, as we warned multiple times, as talking heads proudly proclaimed the bottom was in for stocks and Powell would pivot, the short-term interest-rate (STIRs) market was decidedly un-dovish and even ahead of Powell’s definitive dove-destroying (brief) message last Friday, Nomura’s Charlie McElligott notes that:

STIRs actually never wavered last week in their consistent “hawkishness,” as opposed the the “Enter the Stupid” of the insane Equities rally overshoot Thursday: in fact, most of those profile ED$ curves we have been monitoring show Fed path expectations have barely moved since Powell spoke Friday… 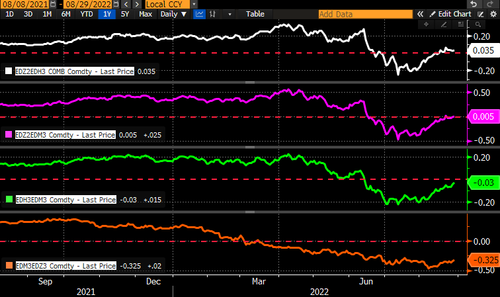 This is because STIRs had already accurately reflected Fed “tightening” prior to the Powell speech Friday (priced-in ahead of the actual remaining hikes—no changes from Powell with regard to NEW hikes—just iteration of “restrictive for longer”), and also too then accurately removed any prior Fed “easing” in that 1H23 period over the past month + (the “de-inversions” in EDZ2-H3, Z2-M3), after the mid-Summer “recession scare 1.0” priced in premature Fed cuts.

That said, McElligott notes that 33bps of implied Fed CUTS do still remain in 2H23, because the view is that “restrictive for longer” in the medium-term then means much higher probability of “hard-landing” recession longer-term (Note: Powell made ZERO references to “soft landing” in his speech), which will then necessitate a commensurate large “easing” to start the next Fed policy cycle, which is helping to keep the long-end moves relatively more contained.

So what does all this mean for Equities now, as the narrative flips from BTFD to the reality of Earnings, Multiples and Valuations.

The Nomura strategist points out that as the entirety of the Equities down-trade in ’22 has been on tighter FCI and Fed hiking impact on the MULTIPLE, it seems the market is again turning its gaze towards Q3 negative EARNINGS revisions as the driver of the “next leg down” on risk of lower profit margins and lower earnings growth as the slowdown “bites”

Although with front-end Yields impulsively higher here, a snapshot PE multiple is now generously closer to 17.5x’s versus the current recently used est PE of 18x’s

After the shock-down in US Equities Spot index Friday, Options Dealer positioning is again a big part of the story moving-forward, trading in “Short Gamma vs Spot” location for all major indices / ETFs… 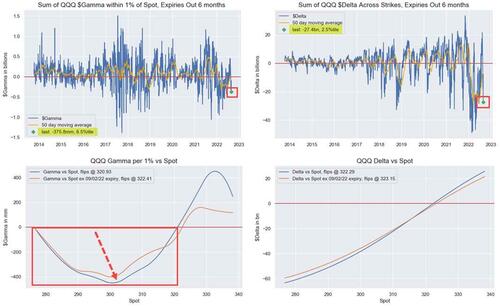 …with big downside levels nearing with SPX @ 4000 and QQQ @ 300 in the crosshairs, as potentially “acceleration points” lower.