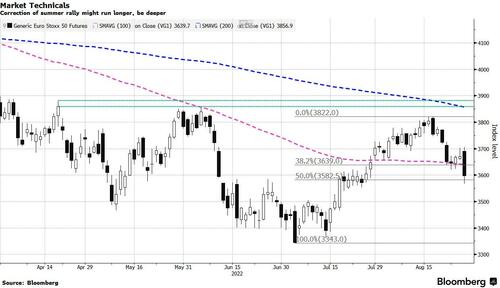 The message from central bankers at Jackson Hole has been crystal clear and stocks didn’t like it: fighting inflation remains a top priority.

The double salvo of bad news for equities came within 30 minutes. A Reuters report about ECB officials considering a 75bps hike at their next meeting triggered a sharp decline for stocks, made worse by hawkish comments from Fed Chair Jerome Powell that “restoring price stability will likely require maintaining a restrictive policy stance for some time.”

The Stoxx Europe 600 Index tumbled 1.7%, ending the second week in a row in the red and snuffing out any hopes of a swift resumption of the summer rally. The selloff was even more brutal on Wall Street on Friday.

“The reference to demand-induced inflation from the Fed’s standpoint has shaken many market participants awake and will likely change their view on the overall situation,” says Comdirect Bank strategist Andreas Lipkow.

Friday’s market reaction underlines how premature investors were in assuming a Fed policy pivot point or peak inflation — or both — were within reach. Rather, more inflation fire-fighting for longer is the message that now needs to be priced in.

Instead of stocks seizing an opportunity to resume their advance after giving back a chunk of their summer gains, it now looks like the retracement might run longer and deeper. Plus, there are some tough resistance levels in the path of any meaningful advance, which could prove difficult to crack, especially as Europe confronts an energy crisis and the threat of a recession.

Those bearish headlines came at an unpleasant moment for European stocks. As we pointed out last week in Taking Stock, the market has lost crucial positioning factors, options mechanics and short covering that helped it push higher.

A glance at volatility futures with expiries between one and nine months shows that while the front-end has calmed down significantly over the course of the last three months, the back-end remained stubbornly high. It’s a sign that parts of the market weren’t expecting as smooth a ride as the VIX Index decline alone suggests — or at least that investors keep hedging for the unknown future. 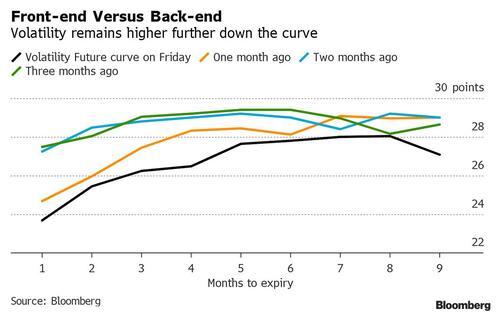 Other fundamentals are also keeping stocks on edge, with August’s preliminary PMI prints in recession territory, inflation expectations rising again and a threat to dividends and buybacks in Europe looming as corporate margins come under pressure. 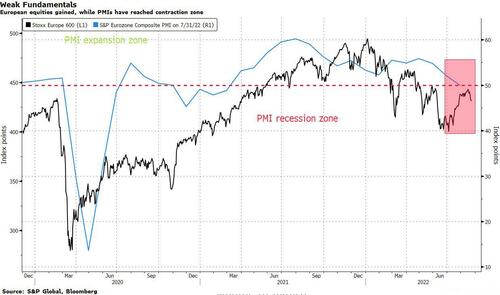 “The Fed needs to engineer much tighter conditions to slow the economy, and therefore needs all assets to price higher risk premia,” says Peter Chatwell, head of global macro strategies trading at Mizuho.