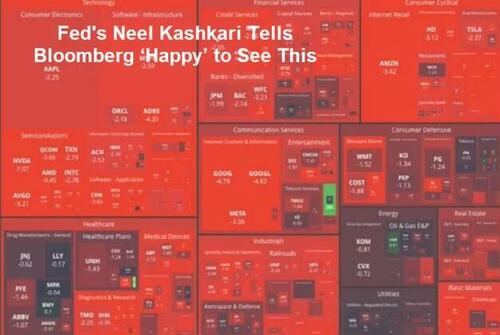 After actively promoting bubbles in housing and the stock market for years, the Fed is now rooting for a price crash…

“I was actually happy to see how Chair Powell’s Jackson hole speech was received,” Kashkari said in an interview with Bloomberg’s Odd Lots podcast on Monday, reflecting on the steep drop after Powell spoke. “People now understand the seriousness of our commitment to getting inflation back down to 2%.”

“I certainly was not excited to see the stock market rallying after our last Federal Open Market Committee meeting,” he said. “Because I know how committed we all are to getting inflation down. And I somehow think the markets were misunderstanding that.”

“One of the biggest mistakes they made in the 1970s at the Fed is they thought that inflation was on its way down. The economy was weakening. And then they backed off and then inflation flared back up again before they had finally quashed it,” Kashkari said. “We can’t repeat that mistake.”

Fed’s Kashkari has just said: I am delighted by the market’s reaction to the Jackson Hole.

The Fed actively promoted a housing bubble to bail out banks following the DoCom crash. Of course, the DotCom bubble was openly embraced by Greenspan as a productivity miracle.

Not understanding bubbles and crashes, the Fed promoted the “Everything Bubble” as it is now called in response to the housing crash and great recession.

Finally, the Fed actively promoted the biggest bubble of them all in response to the Covid pandemic by the most QE and monetary stimulus ever coupled with the biggest fiscal stimulus in history.

Now, the Fed has decided it does not like the inflation it created.

The only way it knows how to fix inflation is via demand destruction. The way to do that is to kill the wealth impact from the bubbles it created.

So now the Fed is cheering the stock market decline.

Gaps Galore on the Stock Market, Where Is the Market Headed and When?

Earlier today, I commented Gaps Galore on the Stock Market, Where Is the Market Headed and When?

The Fed has eliminated any talk of a pivot. It might do so, but only if there is a credit event.

Housing is in a bigger bubble from a price perspective, but this time there is not the underlying liar loan problem. Nor is there a huge wave of layoffs coming.

The job market is tight and unlike most other economic bears, I expect this recession will have a minimum unemployment rate rise. 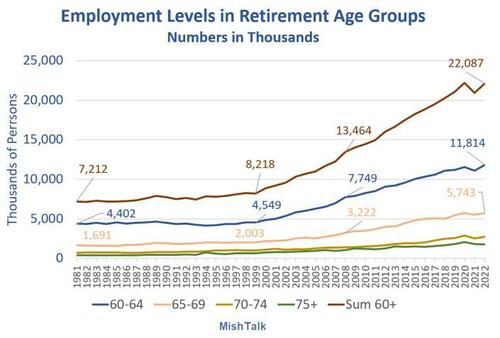 With over 22 million people aged 60 or over and roughly half of them 65 or over, millions of boomers will be retiring in the next couple years.

Employment lost due to retirement will not add to the unemployment rate.

Powell has plenty of room to hike at will especially given the massive number of openings in the Leisure and Hospitality sector.

Expect a Long Period of Weak Growth, Whether or Not It’s Labeled Recession

On August 19, I commented Expect a Long Period of Weak Growth, Whether or Not It’s Labeled Recession

Stocks are priced for perfection, not a long period of weak growth, and with the Fed openly cheering their demise.