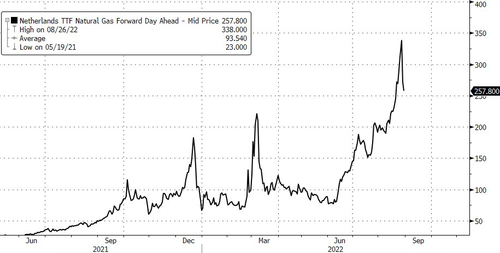 Engie said Gazprom notified it of “a reduction in gas deliveries, starting today, due to a disagreement between the parties on the application of some contracts.”

Gazprom’s reductions in NatGas over retaliation for sanctions related to its invasion of Ukraine have primarily targeted Germany and eastern Europe but now appear to extend to France. The continent is facing the worst energy crisis in half a century, sending prices of NatGas to record highs on supply shortage concerns ahead of the winter season.

French Energy Transition Minister Agnes Pannier-Runacher spoke with France Inter radio about the NatGas curbs to Engie, who warned: “We’re getting ready for the worst-case scenario, which is a complete cut-off.” She said Moscow is using NatGas as a weapon of war.

Engie’s deliveries of Russian NatGas averaged in the 17% range but have since slumped to only 4% in recent months.

The good news is the utility announced it “had already secured the volumes necessary to meet its commitments towards its customers and its own requirements, and put in place several measures to significantly reduce any direct financial and physical impacts that could result from an interruption to gas supplies by Gazprom.”

The announcement follows the EU’s announcement on Monday to prepare emergency measures to reduce the price of electricity by separating it from soaring NatGas prices.

MAP OF THE DAY: Wholesale day-ahead electricity prices breaching the €700 per MWh barrier in multiple European countries today. Two years ago, the typical price was leas than €50 per MWh. These are prices paid for **today’s electricity** #EnergyCrisis #energytwitter pic.twitter.com/i6EHnwdBvO

“Currently, gas dominates the price of the electricity market . . . with these exorbitant prices, we’ll have to decouple.

“We’ll have to ensure renewable energies are generated at lower costs, that those costs are transferred to consumers and windfall profits used to help vulnerable households. We need an emergency instrument which would be triggered very quickly, in weeks perhaps,” von der Leyen said.

Europe’s energy crisis deteriorated in August as the price of NatGas soared, rising more than $500 a barrel of oil equivalent last week. EU NatGas prices Tuesday morning are around 257 euros per megawatt-hour. France’s power situation has become direr due to the shutdowns of nuclear power plants. The country generates around 70% of its electricity needs from a fleet of 56 reactors, though 32 are offline for routine maintenance or corrosion risks. Less nuclear power has led the country to increase electricity imports from neighboring countries or become even more reliant on other power generation sources.

Engie Executive Vice President Claire Waysand outlined France does have a buffer with NatGas storage facilities around 90% filled. Across the EU, the figure is about 79.4% as of Aug. 27, compared with the target of 80% by the start of November.

Waysand also said the utility is holding discussions with Algeria’s Sonatrach as a move away from Russian supplies. Any new contract with the North African nation wouldn’t be finalized until after this winter.

Europe is betting Norway could be their saving grace as the Scandinavian country surpasses Russia as the top supplier of NatGas to the energy-stricken continent. EU’s move to diversify NatGas supplies away from Gazprom isn’t an overnight process and could result in several dark and cold winters.