This was not supposed to happen.

After three months of rapidly declining job openings, which however were not declining fast enough to put a dent in surging wages or to tighten the labor force to a point where the unemployment rate jumps and forces the Fed to halt or reverse its rate hikes, moments ago the BLS reported that in July, contrary to the hopes and expectations of virtually everyone from the Fed to the Biden admin, the number of job openings actually jumped from 10.7 million (since revised to 11.04 million) to north of 11.2 million, smashing expectations of 10.375 million by over 800,000!

… or roughly 2 openings for every unemployed person. 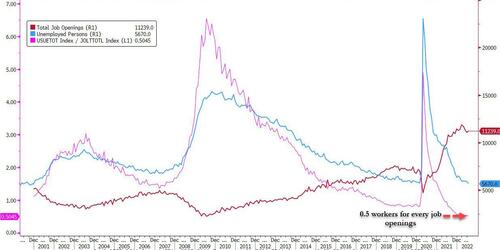 In retrospect, perhaps the jump in openings should not have been a big surprise as it coincided with the month in which the BLS reported a surge in hiring when a whopping 528K jobs were added (according to the Establishment Survey if not Household Survey) even if it was largely the result of record multiple jobholders (as discussed previously).

Bizarrely, while job openings unexpectedly jumped indicating continued labor market strength, the number of actual hires shrank again, and dropped to the lowest level since August 2021! As shown in the chart below, there is a notable divergence emerging between the 12 month job change and the number of hires – 2 series which traditionally follow each other with an almost 1.000 correlation. 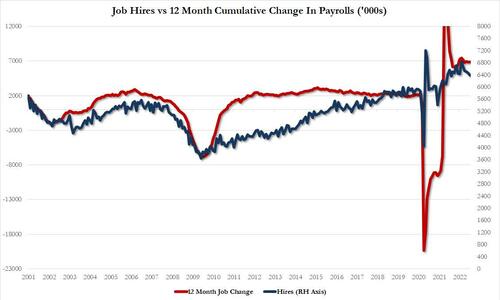 It wasn’t just hires which came in weak: the number of quits dropped to 4.179MM from 4.237MM, the lowest print since October 2021, as far fewer workers had the guts to quit their job in hopes of getting a better paying alternative. 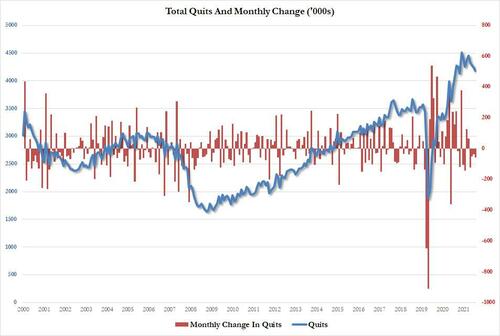 Bottom line: after three months of much needed drops in job openings, July saw a bizarre, unexplained reversal, one which pushed the ratio of job openings to unemployed workers near the highest on record. Meanwhile, even as job openings increased, both Hires and Quits continued to deteriorate, extending the ongoing weakness in the labor market. Long story short, this is not the first time the DOL was forced to manipulate data – we caught them several years ago in a gaping disconnected between data series one which they were forced to subsequently admit was a mistake – and we expect that the BLS will do the same and completely revise both its JOLTS and labor market data once the political pressure to make the labor market appear stronger than it is, fades away.  Translation: expect normalcy to return after the midterms.