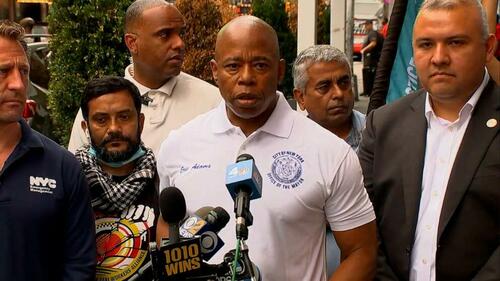 While New York City signaled plenty of virtue over their “sanctuary city” status, the Big Apple failed to put their money where their mouth is when it comes to actual resources, and are currently drowning amid a surge in illegal immigrants after Texas began sending busloads of border crossers.

Now, the Department of Homeless Services tells the NY Post that it’s abandoned a plan to operate an intake and processing center for the new arrivals, alongside a 600-room shelter at the ROW NYC hotel on 8th Ave. in Midtown – a yet-to-open facility that was supposed to be up and running two weeks ago.

DHS also admitted that it has yet to select and rent any of the 5,000 hotel rooms the agency said it is seeking to house migrants across the city.

Instead, officials are continuing to commingle migrants with New Yorkers in the city’s existing shelter system — which now includes 15 “emergency” hotel facilities to also help handle a summer population surge, according to the DSS on Friday.

City Hall has refused to say how much the city is spending on housing migrants in the homeless-system hotels, but a Post analysis found the cost could surpass $300 million. -NY Post

“We were already facing a crisis of homelessness in New York City when the flow of these migrant families started in earnest,” said homeless rights advocacy lawyer, Josh Goldfein with Legal Aid.

“We’ve always had asylum seekers in the New York City shelter system, so that is not new. But obviously, the volume increased.”

North of 6,000 migrants have sought shelter in New York City since May, many of whom were bused in by Tex. Gov. Greg Abbott.

The influx of migrants led to NYC Mayor Eric Adams appealing to the White House for assistance – financial and otherwise – a call which has gone unanswered. According to an official with knowledge of the city’s efforts, Adams’ admin has also reached out to the US Conference of Mayors for help.

We assume he was met with extra-quiet crickets.

“If Adams has not resolved this by the late fall, he will have a big problem. A failure to resolve this as the weather changes is going to be a real problem for the mayor,” he added.

“It’s a public-relations disaster, and there’s no indication that Abbott is going to stop sending people here.”