Used-Car Market Cools As Prices Plunge To One Year Low 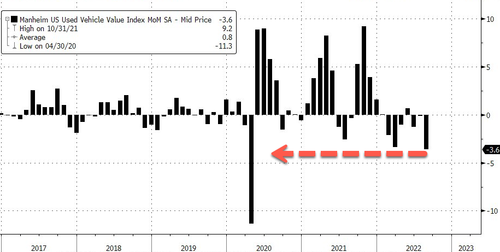 In April, while wholesale used-vehicle values were at record highs, we asked, “Are Used Car Prices About To Peak For Real This Time?” We pointed out one month later, “Used Car Prices Are Crashing At A Near Record Pace.”

The latest Manheim Used Vehicle Value Index that tracks what dealers pay for used cars at auction is at a one-year low of 211.6.

Cox Automotive analysts said sliding wholesale used-vehicle values should continue through August. SUVs and pickups saw the most declines in value at auctions while minivans fell less — likely a function of thin supply, according to analysts. They said compact cars saw auction prices stable, noting it was likely due to more demand because elevated fuel costs have pushed consumers to more efficient vehicles.

A metric called “days of inventory” – how long it would take dealers to sell out of cars at the current sales rate if they couldn’t acquire new stock – was eight days higher than a year ago as the nationwide supply of used vehicles (as of Aug. 15) was improving.

Cox analysts noted consumers’ views of buying conditions for vehicles declined in August due to elevated prices and soaring rising interest rates. They said the only prior time consumers felt this pessimistic about purchasing a car was when auto loan interest rates were sky high in the early 1980s.

Looking at Bankrate data, rising auto loans for used vehicles may have been enough to crimp demand as used car price growth on a yearly basis has cooled since rates began surging in the first quarter. 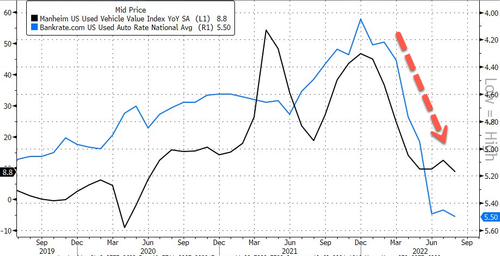 Perhaps with supply rising and affordability woes mounting, we may have correctly called the peak in used car prices between April-May timeframe. What comes next with a uber-hawkish Federal Reserve is possibly the implosion of the car bubble that could leave millions of Americans who bought the pandemic peak underwater.

Just wait until these youngsters with +$1,000 monthly payments panic sell their vehicles as the economy craters.

The car market is in a very big, ugly bubble. @DiMartinoBooth just did a great episode covering the topic, but the payments people have are unreal. How did it become normal for people to have payments in excess of $1000 a month!? They sound like rents, not car payments. pic.twitter.com/0YoEOL9seJ