It’s not just European smelters shutting down due to soaring energy prices: the entire German economy is about to get its plug pulled.

… Europe is facing economic devastation and depression at a scale that will make 2008 seems like a walk in the park.

As the FT reports, German manufacturers are halting production in response to the surge in energy prices, a trend the government has described as “alarming”. German economy minister Robert Habeck said industry had worked hard to reduce its gas consumption in recent months, partly by switching to alternative fuels like oil, making its processes more efficient and reducing output. But he amusingly clarified, some companies had also “stopped production altogether” — a development he said was “alarming”.

“It’s not good news,” he said, “because it can mean that the industries in question aren’t just being restructured but are experiencing a rupture — a structural rupture, one that is happening under enormous pressure.”

Habeck said rising gas prices were affecting everyone from big industrial companies to small trading firms and the medium-sized enterprises that make up the “Mittelstand”. “Wherever energy is an important part of the business model, companies are experiencing sheer angst,” he said. And since energy is a crucial part of every business model, one can only imagine the chaos, fear and loathing hammering the largest European economy right now.

Confirming that Trump was right all along, the German minister said the business model of large parts of German manufacturing was based on the abundance of gas from Russia that was cheaper than gas from other regions. That competitive advantage “won’t come back any time soon, if it ever comes back at all”, Habeck said.

Whether he was aware of it or not, Habeck effectively echoed what Zoltan Pozsar said over the weekend, that Europe is facing a Minsky moment triggered by excessive financial leverage “and in the context of supply chains, leverage means excessive operating leverage: in Germany, $2 trillion of value added depends on $20 billion of gas from Russia… …that’s 100-times leverage – much more than Lehman’s.” 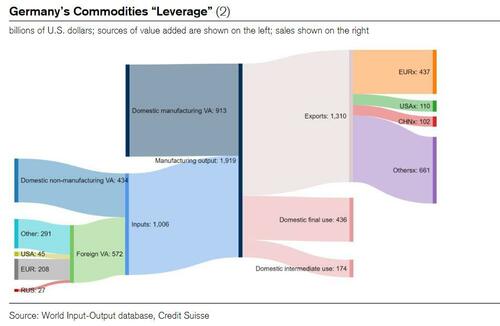 The German spoke just as Russia escalated its “squeeze” of Europe, having halted the flow of gas through the Nord Stream 1 pipeline for three days of planned maintenance. The outage comes with European countries already laboring under sharp price rises as a result of dwindling Russian supplies. Prices have more than doubled since Russian exporter Gazprom first restricted deliveries through Nord Stream 1 three months ago.

Habeck’s comments echo the May warnings from Siegfried Russwurm, head of the main German business lobby, the BDI. He said earlier this month that a lot of companies were having to shut down production because “expenses and income are no longer matched”. He said German companies were not only labouring under higher energy prices but also under the recent interest rate hikes in the US and the slowing growth in China, one of Germany’s largest export markets.

In short: German corporations are facing a perfect storm.

The pessimism was reflect in the recent Ifo Institute survey, which showed that German business confidence had fallen for its third consecutive month. The index, based on a monthly survey of 9,000 companies, slipped to a more than two-year low of 88.5, down from 88.7 last month.

Habeck was speaking after a cabinet away-day at the government’s guest house Schloss Meseberg, outside Berlin. Finance minister Christian Lindner said after the meeting that the government was working on a “massive” package of relief measures for hard-pressed consumers buffeted by soaring inflation and rising energy prices.

So… on one hand the ECB is preparing to hike rates 75bps to crush demand and cripple inflation, while on the other hand, Germany is preparing to boost stimulus with a “massive” stimulus package of relief measures to offset the soaring inflation that the ECB’s previously policies enabled. What can possibly go wrong.