The confusion amid the “world’s smartest people”, where they hope to trigger a global, economy-crushing depression in order to somehow prompt Putin to send more gas to Europe, got worse today when Europe reported another hotter than expected record inflation print, which sent short-end yields sharply higher. 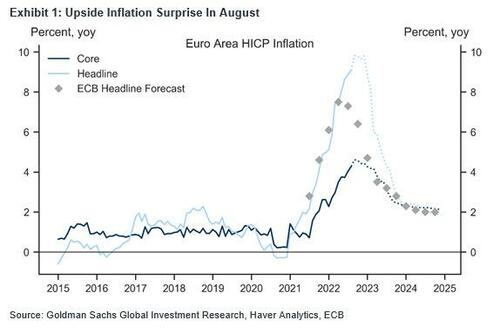 In response to the numbers, Goldman wrote that it now expects Euro area core inflation to peak at 4.6%yoy in September and October, and looks for headline inflation close to 10% in Q4.

More importantly, moments after the data printed, both Bank of America and Goldman (and soon, most other banks) changed their forecast for what the ECB will do next, and both now expect Lagarde to hike rates by 75bps in September. Here is Goldman’s Sven Jari Stehn:

Some more points from Goldman:

1. We now expect the Governing Council to hike by 75bp at the September meeting. First, today’s inflation data surprised further to the upside, with headline HICP climbing to 9.1%yoy and, importantly, core HICP rising to 4.3%yoy, in another strong sequential monthly print. We expect inflation pressures to rise further in coming months as the 9-Euro ticket in Germany ends and high energy prices feed through into retail prices, with a peak in core inflation at 4.6% in September and headline inflation close to 10% in Q4.

2. Second, the incoming activity indicators have, so far, held up somewhat better than expected, and we see upside risk to our forecast for a slight contraction in Q3. Given ongoing tensions in European gas markets, we remain comfortable with our forecast for a Euro area recession but look for a mild downturn.

3. Third, recent ECB commentary has been hawkish. Following Executive Board member Schnabel’s speech at Jackson Hole—where she argued that the ECB needs to “act forcefully” to “bring inflation back to target quickly”—a number of speakers have said that another half-point rise is the minimum and that 75bp should be considered at the next meeting (Exhibit 2). While not a done deal—as some Governing Council members have advocated a steady pace of hikes—we therefore think a 75bp hike at the September meeting is more likely than another half-point step. 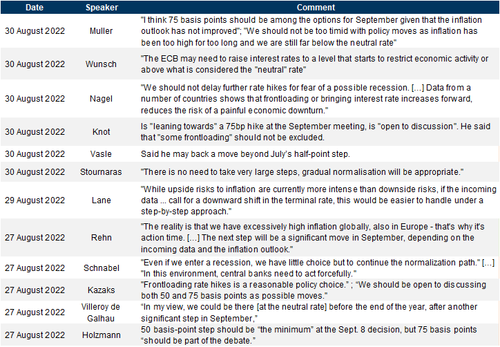 4. Looking beyond next week, we now look for 50bp in October (vs 25bp before), followed by two more 25bp hikes for a terminal rate of 1.75% (vs 1.5% before), taking policy more clearly into restrictive territory (Exhibit 3). While a sharper recession or a return of sovereign stress could lead to an earlier end to the hiking cycle, we see risks skewed towards a higher terminal rate in the event of more persistent inflationary pressures and stronger second-round effects. 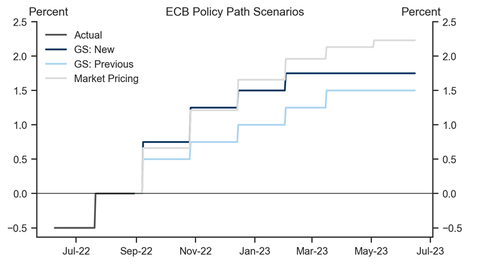