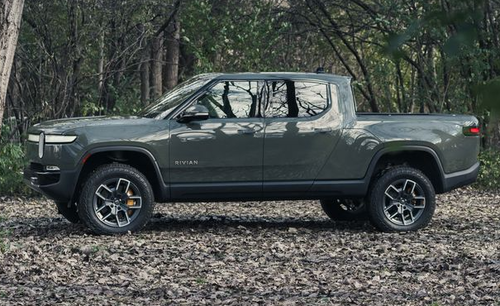 Move over Tesla, people are starting to swoon over the new Rivian models. Certainly that was the case with Wired, who reviewed the models in a new piece out yesterday, giving the vehicles a 9/10 rating.

The result? The R1T turned out to be the highest rated EV author Matt Jancer has ever reviewed.

Most importantly were the truck’s range claims and ability to gauge how much range was left. As the review notes “changes in temperature, weather conditions, driving style, speed, and traffic congestion can all throw a range estimator off” but “the Rivian was remarkably precise on its range calculations at all times”.

“Real-world range during my 1,300-mile journey was strong,” he wrote. “Only significantly changing my altitude or temperature seemed to throw the range estimator into momentary confusion, which is expected and normal.”

He also talked about all of the driving modes for the truck, lauding its for its speed, acceleration and torque: “Slight movements on the pedal call forth surges of instantaneous power, and the Rivian is a fast truck. With the quad-motor Rivian packing 835 horsepower and 905 foot-pounds of torque, it can apparently reach 60 miles per hour from a standstill in three seconds.”

“Both the R1S and R1T performed competently, thanks to a NASA control room’s worth of electronic calculations and adjustments that the truck continuously makes to send the right amount of power to the right wheels at the right time,” he continued.

He called the vehicle a “home from home” his review, leading with how comfortable the interior was. He even noted that during his journey, the driver’s seat was easy to sleep in:

I never sleep well in cars, but with the driver’s seat leaned all the way back and the charging station pulsing slowly as it fed the Rivian’s batteries, I nodded off in no time. Automakers have gotten awfully good at creating synthetic leather that can be mistaken for the real thing. The R1T’s faux-leather seats could’ve fooled anyone, and even after several 12-hour days driving (and sleeping in) the Rivian, I never once felt a pang of discomfort.

Jancer also said that the interface of the touchscreen was “the best of any all-screen infotainment center I’ve seen yet”.

He continued, on the interface, stating: “It’s all the more impressive because a towing, hauling, off-roading, commuting truck like the R1T has so many more driving configurations than, say, the Polestar 2, which has a similarly industry-leading and intuitive UI, but is not as aesthetically pleasing or packed with as many driving screens and settings. The touchscreen interface is a weakness for many car companies, and it’s astonishing that they don’t look at systems like this for valuable lessons.”

And finally: “The amount of information that has to be communicated to the driver through the infotainment system would be daunting if it weren’t so cleanly and intuitively designed. The range and performance from tarmac to dirt track is exemplary. The plush interior and clever storage solutions round out the small details that competing trucks—and even cars—don’t offer, but should.”