Blain: The Stock Market Rout Has Only Just Begun 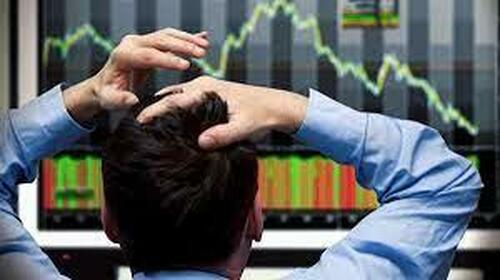 “The thieves, they love a siege. Soon as the gates are sealed, they steal all the food. By the time it’s all over, they’re the richest men in town.”

Harry Hindsight is the greatest trader who ever lived. He saw the July/August rally was just a bear trap. But, he’s not revealing his thoughts on how much further the market has to correct. Some analysts see mean reversion all the way back to 2008 levels!

This morning – back the usual stuff: Wither the stock market?

Yesterday myself and some colleagues were recording the latest Shard Podcast, talking about the market outlook for the rest of this tumultuous year. We weighed the risks of recession, price to earnings ratios, declining profits, inflation eating into consumer discretionary cash, and global trade, plus a host of other stuff. We concluded there is still significant downside risk to equities, and more pain to come for longer in bond markets.

As soon as the podcast is out, I will flag it.

I’m pretty sure I mentioned “mean reversion” risk at one point… the basic rule of everything that all things revert back to normal, which in the case of the stock market is going to be “painful” at best.

Yesterday we also had market legend Jeremy Grantham on BBerg warning the current stock market super bubble has “yet to pop”. He said what many of us believed about the July/August rally – it was a bear trap: a bear market rally after an initial sharp decline. Grantham cited “a dangerous mix of overvalued stocks, bonds and housing, combined with a commodity shock and hawkishness from the Fed” as further reasons to be fearful.

The reality of mean reversion takes us right back to when the stock market was last normal – which was sometime back in the late 1990s, early 2000s before Central Banks decided their price stability mandate included market stability as a precondition to stability.

Oh, ye Mighty, look upon my works and despair… is the lesson they have now learnt. Mess with markets, and they will mess you back.

Central Bank monetary experiment has proved a clusterf*ck of monumental proportions. Its  resulted in the most distorting period of market manipulation ever. From 2010-2021 central banks piled on Quantitative Easing and Zero Interest Rate Policy to notionally boost economic growth (which they did not) and then Governments made massive fiscal injections into the economy to combat Covid. Sweet Jesus – what a mess they made…

The result is all that cash – trillions up gazillions of dollars – ended up not in the real economy, but in financial assets. The value of bonds and stocks went stratospheric, chasing each other higher, even though the real economy did little more than chug along. We pretended the world was changing as tech – basically someone delivering take-away food to your front door, electric batteries, or using a phone to order a taxi by app instead of an actual call – was technological miracle advancement. Doh!

We did not see any great industrial revolution improving productivity – what we saw was the creation of millions of low paid, zero-hours type jobs and a massive imbalance in wealth equality as the rich got insanely richer on stock market gains, and inflated C-suite rewards, while everyone else got progressively poorer.

We are now into the end stage of the game:

So where does this take us?

Clearly… after a very boozy market party there are going to be hangovers a plenty. They are going to hurt. How much?

I would refer you to great chum of mine, David Murrin, who has done fantastic work on reading the Code of Markets. Check out his website www.DavidMurrin.co.uk – he may even give you a free trial if you mention the Morning Porridge.

David does a lot of stuff – and has an opinion on just about everything – but his chart work is absolutely on the ball. As central banks continue to aggressively hike interest rates (and everyone now expects 75 bp from the ECB), David is predicting: “the Western Economies that have been based on cheap money at ultra-low interest rates will quite literally fall apart, and the stock market will collapse.”

His read on the charts is the current down leg takes global stock markets down 50% from the highs – to the kind of levels we were back in 2015-17, before a bounce before a second down-leg takes us the full mean reversion back to levels (adjusted for inflation) last seen pre-2008.

When Is Christmas Already?