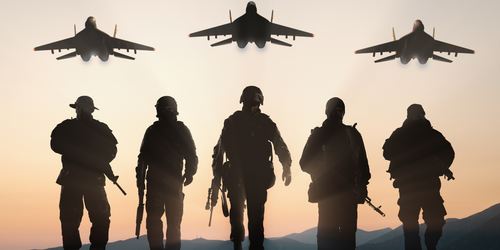 The already increasingly woke US military is going even woker, moving closer to adopting “preferred pronouns” – a trend which has become dogma a fixture of progressive university campuses, according to an internal memo from US Pacific Air Forces (PACAF).

The Washington Free Beacon this week published a screenshot of a PACAF memo circulated among commanders which advises a shift to more neutral language, especially when writing reports, directives, and in daily on-the-job speech. While this order applies to a specific Air Force major command, the instance strongly suggests this is the path all armed forces branches could soon take in the coming months or years.

The partial copy of the internal memo, which was circulated in the form of an email this past May, says: “In accordance with the Diverse PACAF priority, ‘We must embrace, promote and unleash the potential of diversity and inclusion.’“

The Beacon writes that it was sent senior leaders and commanders at the Andersen Air Force Base in Guam under the Pacific Air Forces, which it must be noted is among branches tasked with confronting China.

Absurdly, the more ‘pronoun sensitive’ environment on the remote island base will help enhance the American fighting force’s “lethality” – the memo explains.

Across the waters, in Beijing, Chinese officers must be laughing… The email further lays out the following:

Leaders at the base are instructed, “Do not use pronouns, age, race, etc.” when writing performance reviews or other materials, such as recommendations for awards. “Competition against near-peer adversaries requires a united focus from the command, the joint team, and our international partners. Welcoming and employing varied perspectives from a foundation of mutual respect will improve our interoperability, efficiency, creativity, and lethality.”

Below – screenshot of the directive revealed by The Washington Free Beacon: 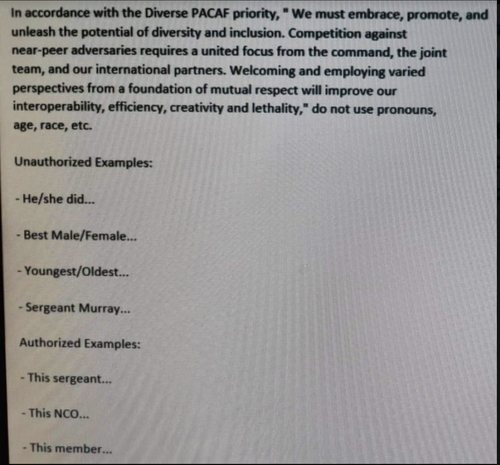 The Department of Defense has already for years mandated that classes be given to all enlisted and officer personnel regarding LGBTQ++ sensitivity training – and more recently there’s been a move to provide greater accessibility to “gender-transition surgery” – all at the US taxpayer’s expense of course.

Just how the gender neutral language directive pushed by US Pacific Air Forces leadership could possibly improve “lethality” is unclear and left unexplained in the content published by the Beacon.