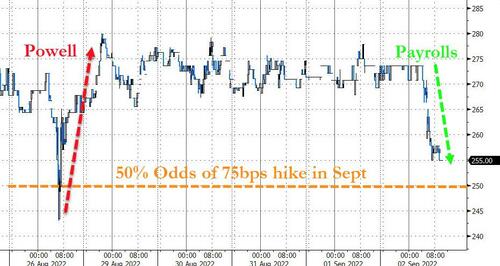 In the aftermath of the first 75bps rate hike in June, which made a mockery of the Fed’s forward guidance and which required a WSJ “whisperer” to prep the market for the biggest rate hike in three decades with about 24 hours notice, Nick Timiraos – the new generation’s Fed-trial ballooner and a poor man’s Jon Hilsenrath, has become a bit of a celebrity in Fed watching circles as everything he says is now viewed as gospel explicitly coming from Powell’s mouth. Which is why many were anticipating his NFP post-mortem today, “explaining” how today’s jobs report would impact the Fed’s thinking.

What he said was a nothingburger, echoing our own take from this morning, namely that the Fed is still on pace for 50 or 75bps, and that the CPI report from Sept 13 will be the tiebreaker, to wit:

The latest strong employment figures keep the Federal Reserve on track to raise interest rates by either 0.5 or 0.75 percentage point at its meeting later this month to combat high inflation.

Monthly wage growth eased last month to its slowest pace in six months. Average hourly earnings for private sector workers rose 0.3%, or an annualized rate of 3.8%, in August from July and 5.2% from a year earlier.

Friday’s report isn’t likely to significantly change Fed officials’ views about how much to raise the fed-funds rate at their Sept. 20-21 policy meeting. A handful of them have indicated they would prefer to lift it by 0.5 percentage point, though they have left the door open to backing a 0.75-point increase. At least one official, St. Louis Fed President James Bullard, has said he would favor a third consecutive 0.75-point rate rise.

An August inflation report, due on Sept. 13, along with other data on spending and economic activity could further influence the debate over how much to raise rates later this month. Officials have said they want to see evidence that price pressures and economic growth are cooling before they slow their pace of rate rises, but they have signaled they also are paying attention to how their previous increases this year are affecting the economy.

The decision over how much to raise rates this month is likely to come down to how quickly Fed Chairman Jerome Powell wants to get rates high enough to further slow economic activity.

Like we said, nothingburger. Which is why we look to BofA and Goldman’s own reactions to the payrolls report for something more actionable.

In our view, the August employment report contains enough good news for the Fed that will lead them to slow the pace of rate hikes beginning in September. We continue to expect the Fed to raise its policy rate by 50bp in September. Looking further ahead, we maintain our view that the Fed will hike by another 50bp in November and 25bp in December, bringing the target range for the federal funds rate by year end to 3.5-3.75%. Risks to our outlook for Federal Reserve policy are skewed in the direction of more rate hikes on account of underlying momentum in the US economy. That said, based on the full set of data in hand since the Fed last met in July, we think risks are in the direction of more cumulative hikes over time as opposed to another large 75bp hike in September.

We continue to expect another 100bp of Fed funds rate increases over the next three meetings: +50bp in September and +25bp in both November and December, with risks skewed towards earlier or larger increases

Of course, what the Fed does or doesn’t do, is actually secondary because as the latest Gazprom news out of Europe demosntrate clearly, it’s Putin who has been in charge all along.