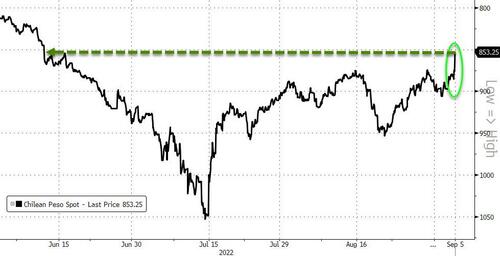 Bucking the trend of most Developing Markets’ currencies, the Chilean peso has surged to three month highs against the greenback this morning after voters on Sunday rejected a progressive constitution that would have drastically changed the country. 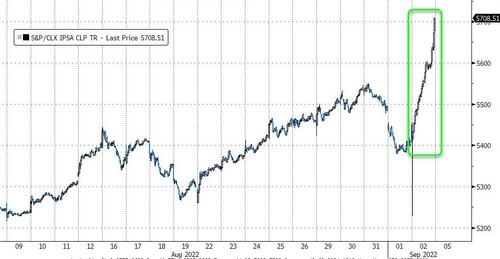 The draft text would have replaced the current constitution, which dates to 1980, when dictator Augusto Pinochet was in power.

As Caden Pearsen reports from The Epoch Times, over 13 million residents of Chile voted in a referendum either for or against the proposed changes to the South American country’s Constitution.

Participation in the referendum was mandatory.

The failed proposals would have tilted the current Constitution to the left, with text focused on social rights, environmentalism, gender equality, and indigenous rights.

The path to the referendum began in late 2020, when 80 percent of Chileans voted to draft a new constitution. But polls revealed that uncertainties grew amid concerns around the constituents elected to draft it, Reuters reported.

One 54-year-old Chilean, who in 2020 voted to draft a new constitution, on Sunday voted alongside her daughter to reject the proposed text. She expressed concern that certain proposals would impact her pension.

“The main one is [indigenous] plurinationality and then pension funds,” Rosemarie Williamson said in comments obtained by Reuters.

“I’ve worked my whole life and I’m not willing to share that.”

Leftist President Gabriel Boric, who voted in the southern city of Punta Arenas early on Sunday, acknowledged the results on Sunday night.

“The yearning for change and dignity require our institutions and political actors to work with more commitment, dialogue, respect and affection, until we arrive at a proposal that interprets us all,” Boris said on Twitter.

Earlier on Sunday, after casting his vote, Boric had promised that the government will work with all sectors, no matter the outcome of the referendum, to “advance in justice, equality, growth, and development for everyone.”

Boris had previously said that if the proposals are rejected, then officials should work on the text to fulfill the mandate given by the 2020 vote to draft a new constitution.