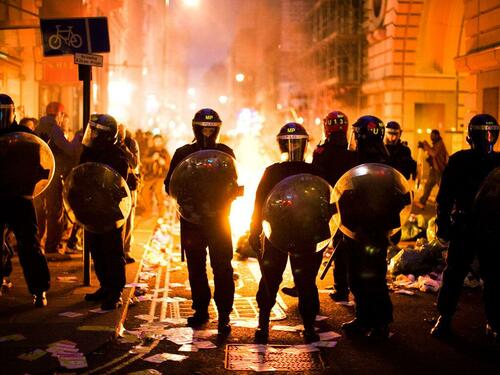 New Prime Minister Liz Truss may have only weeks to deliver a confidence turnaround in the UK economy or face a surge in violent crime and breakdown in public order caused by a cost-of-living crisis.

The Times revealed police chiefs fear “economic turmoil and financial instability” has the “potential to drive increases in particular crime types,” such as shoplifting, burglary, vehicle theft, and online fraud and blackmail, as Brits face one of the worst collapses in living standards in a century amid energy hyperinflation.

“Greater financial vulnerability may expose some staff to a higher risk of corruption, especially among those who fall into significant debt or financial difficulties,” it continued.

About 160,000 Brits have joined a movement against skyrocketing electricity bills, vowing not to pay come Oct. 1.

Last Friday, Russia’s energy giant Gazprom PJSC halted flows via Nord Stream 1 to Europe, sending EU natural gas and electricity prices soaring on Monday. This means Truss hardly has any time to deliver a coherent strategy to save households from energy poverty and businesses from failing.

The massive protest in Prague this past weekend, where tens of thousands of Czechs flooded the streets, offers a glimpse of the impending social unrest that could hit the street of the UK if power bills continue rising without government intervention.

Published last week was a new report via Verisk Maplecroft, a UK-based risk consulting and intelligence firm, warning there’s a high risk of social unrest in Europe later this year due to rising inflation.

Europeans are finally waking up to how bad Western sanctions on Russia have backfired, as their governments sacrificed ordinary people over NATO’s proxy fight against Russia in Ukraine. These protests could spread like wildfire across Europe, and it appears the UK is preparing for the worst-case scenario.