Trillions In “Liquidity Support Is Going To Be Needed” As Swiss, Finns Join Europe’s Bailout Brigade 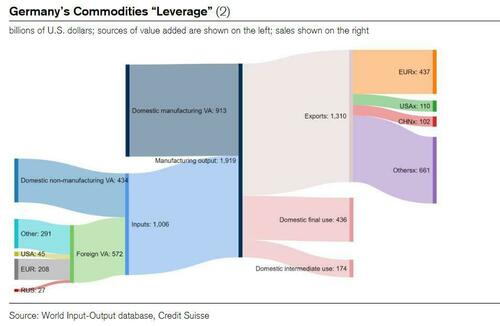 As we detailed over the weekend, many companies are finding it increasingly difficult to manage margin calls, an exchange requirement for extra collateral to guarantee trading positions when prices rise…

Credit Suisse repo guru Zoltan Poszar published what may have been the most insightful snippet of the entire European energy crisis (to date) when he extended the infamous “Minsky Moment” framework to Europe, and specifically Germany, which he said “can’t cover its payments without Russian gas and the government is asking citizens to conserve energy to leave more for industry.” He then elaborated that “Minsky moments are triggered by excessive financial leverage, and in the context of supply chains, leverage means excessive operating leverage: in Germany, $2 trillion of value added depends on $20 billion of gas from Russia… …that’s 100-times leverage – much more than Lehman’s.”

(Zoltan’s entire note is a must read for everyone with a passing interest in what comes next).

But while Germany is front-and-center in this margin call malaise, many other European nations are suddenly succumbing to what Zoltan dubbed a “supply-chain Minsky moment.”

Over the weekend, we reported that Sweden and Austria had begun to bail out their energy suppliers:

And today, Reuters reports that Finland and Switzerland have joined the bailout brigade…

The numbers are adding up fast but pale in comparison to what the final price could be if European governments decide this is their ‘whatever it takes’ moment.

While the physical market is functioning, the derivatives market is beginning to show serious signs of systemic stress.

Bloomberg reports that Helge Haugane, Equinor’s senior vice president for gas and power, said in an interview that “liquidity support is going to be needed,” warning that his company’s estimate for $1.5 trillion to prop up so-called paper trading is “conservative.”

And Haugane confirms what we explained was driving the breakdown in market functioning in the (paper) energy markets:

“This is just capital that is dead and tied up in margin calls,” Haugane said in an interview at the Gastech conference in Milan.

“If the companies need to put up that much money, that means liquidity in the market dries up and this is not good for this part of the gas markets,” he said.

Sadly – but not entirely unexpectedly, Haugane says that EU plans to intervene would be “sensible” for derivatives trading. In other words, we are back to the ‘too big to fail’ arguments from 2008 when fears of the apocalypse (this time in real energy markets ahead of winter) prompted demands that government “do something” to save the over-levered from themselves… with the excuse being ‘if you do not rescue us, there will be hell to pay for the average EU joe’.

Finally, how exactly does this explicitly inflationary ‘bailout’ pair with ECB’s inflation-fighting mandate? We are sure Lagarde and Van der Leyen have all the answers… and if you dare ask, you are a Putin puppet (because remember decades of piss-poor policy decisions signaling as much virtue as possible led to this crisis point among the ‘green’ climate climaxers… Putin’s invasion of Ukraine was merely the final straw that Trump had warned about).

Without the ‘pain’ that Fed Chair Powell has warned about, no one will ever face the consequences of change their actions… but none of that accountability gets you elected, so don’t expect anything but more intervention. As Daniel Lacalle recently concludes, if there is one thing that this crisis shows us, it is that what Europe needs is more market and less intervention. Europe arrived at this crisis due to a combination of arrogance and ignorance on the part of the legislators who control the energy mix. The importance of a balanced mix, with nuclear, hydro, gas and renewables is more evident every day. Interventionist energy policy has failed miserably. More intervention is not going to solve it.