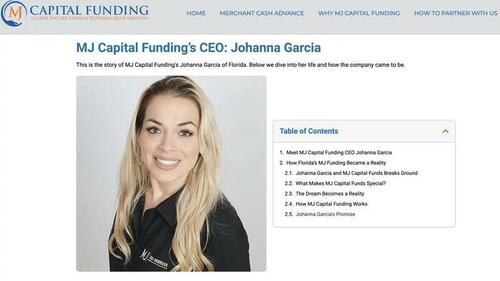 A Florida woman whose website claimed she was “often referred to as ‘Mother Teresa’ in her community” was actually running a multi-million dollar Ponzi scheme which promised investors 120% – 180% annual returns, federal prosecutors allege.

Broward County resident Johanna Garcia, connected investors with companies which needed short-term financing – promising the investors huge returns. Between June 2020 and August 2021, her company, MJ Capital Funding LLC took in more than $196 million from over 15,400 investors. She created a tool known as a “merchant cash advance” or MCA to provide loans to small businesses via a now-defunct website.

Garcia told prospective investors that they were “purchasing future receivables,” which guaranteed them a share of the recipient businesses’ income for months. According to the SEC, however, she was using new investors’ funds to satisfy payments to existing investors – fueling a Ponzi scheme, NPR reports. Company insiders, meanwhile, are accused of spending millions of dollars on travel, luxury goods, clothing and other items.

“From June 1, 2020 through August 31, 2021, the MJ Companies misused investor funds by making payments totaling at least $61.8 million to sales agents for promoting investments in the MJ Companies,” reads a new complaint against unlicensed broker, Pavel Ruiz.

The SEC also alleges that MJ Capital used unlicensed brokers and sales agents to sell unregistered securities. Supporting the scheme, the authorities allege, was Pavel Ruiz, 29, an MJ Capital board member whose sales team of some 70 agents allegedly reeled in at least $46 million from more than 5,100 investors.

Ruiz reaped large rewards from his work, allegedly taking in $292,000 in commissions. But he also diverted some $7.7 million directly into his personal accounts or ones he controlled, according to the SEC. It says he used some of the money to “purchase crypto assets and a luxury vehicle.” -NPR

After initially filing a complaint against Garcia last year, a federal judge has since frozen her companies’ assets and ordered them into receivership.

Last week, the SEC filed the second complaint – this one against Ruiz, which came on the same day as the US Attorney’s Office in the Southern District of Florida accused the unlicensed broker of conspiracy to commit wire fraud – which could land him in prison for 20 years.

Garcia’s name does not appear in the criminal filing against Ruiz; she is referred to only as “Co-conspirator 1,” identified as the company’s leader. When NPR asked the U.S. Attorney’s Office if Garcia might also face criminal charges, a representative said on Monday, “Pursuant to DOJ policy, we can neither confirm nor deny the existence of an investigation.”

Last week, the SEC and Garcia agreed to a partial settlement that would essentially put the agency’s complaint against her on the back burner. They jointly asked Judge Raag Singhal to approve the deal, citing potential complications from what Garcia has called a “parallel federal criminal investigation.”

The proposed wording of the order accepting the partial settlement states, “the SEC can address its request for monetary relief once criminal sentencing is concluded (in the event that the Defendant does not prevail at trial).” -NPR

The investigation began in 2021, when someone created a website with a URL similar to MJ Capital’s, but which accused them of running a Ponzi scheme. Garcia sued the site’s creator in federal court, demanding a jury trial on grounds of defamation. Two months later the FBI became involved – with an undercover agent visiting MJ Capital’s office posing as a prospective investor. The agent gave them $10,000, which they were told would generate a guaranteed 10% annual return.

A change.org petition in support “to come together in support of Johanna in this time of need” has reached more than 3,200 signatures as of this writing. 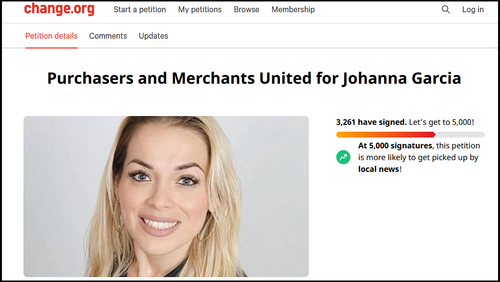