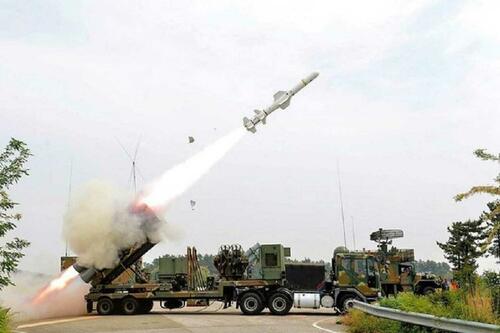 The Pentagon has just admitted that US military personnel are directly training and overseeing Ukrainian missions to sink Russian warships in the Black Sea. The stunning admission comes months after the April 14 sinking of Russia’s Black Sea flagship Moskva guided missile cruiser, which was carrying a crew of 510. It was nothing short of a disastrous and humiliating blow to the Russian Navy, and it was later confirmed that a pair of Neptune missiles took it out. It was also later revealed in that particular case the Ukraine forces had assistance from US intelligence.

But now the Pentagon has revealed that in more recent attacks on Russian warships, the US role runs even deeper that previously admitted: “Ukrainian forces who sunk a Russian warship with Harpoon missiles in June trained in the United States, the Pentagon’s top weapons buyer Bill LaPlante says,” according to a fresh report in Defense One.

“LaPlante said the Ukrainian forces trained in the U.S. over Memorial Day Weekend in late May. The Harpoons were modified to fire from the back of flatbed trucks, he said.”

Shortly after the bombshell report was published, the Pentagon sought to walk back the detail about Ukrainians being trained in the United States, and the following awkward “clarification” was attached to the top of the article: Clarification: A Pentagon spokesperson said Bill LaPlante did not mean to say that Ukrainians were trained in the United States.

But here’s exactly what LaPlante disclosed in comments made in front of a live audience of conference attendees, as recorded by journalists covering the Pentagon:

That key detail of the strike and a few others were disclosed Wednesday by Bill LaPlante, defense undersecretary for acquisition and sustainment, during a conference panel hosted by Defense News near the Pentagon.

The quick ‘correction’ claiming that the top official misspoke is certainly curious and even dubious, given mainstream media headlines have already long detailed training programs for Ukrainian troops taking place in the American mid-west.

Oops: An awkward “clarification” when compared to the Pentagon official’s own unambiguous words earlier in the day. 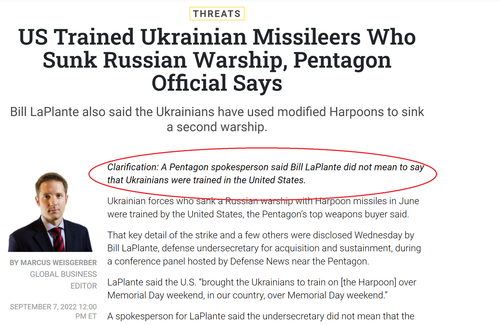 For example, the BBC wrote in June of a program that stretches back before the Ukraine war:

Senior-level Ukrainian officers have been studying in the US state of Kansas, thousands of miles from Russia’s invasion and the battlefields of Donbas.

Outside the Fort Leavenworth army base, wheat fields are starting to turn. Wide, open prairie land, with softly rolling hills, stretches for miles, and the sky is huge.

This quintessentially Kansas landscape has become the backdrop for generations of international soldiers, who head to the US base to receive strategic training.

The vehicle-mounted Harpoons were among the latest to be transferred in recent White House-approved billion dollar weapons packages which have been steadily coming. Moscow has meanwhile warned that it will attack any inbound weapons shipments, and has already claimed a number of ‘successes’ in destroying Western arms depots and rail shipments in the country.

While a number of ships of Russia’s Black Sea fleet have been targeted by missiles fired from Ukrainian forces, it remains unknown which instances involved troops trained by or in the United States.