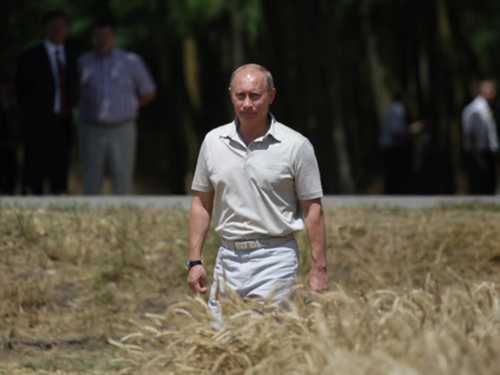 President Vladimir Putin on Wednesday threatened to abandon the UN-brokered Ukraine grain export deal which has lately been declared by Turkey to be a ‘success’ – given at this point dozens of cargo ships have now traversed the Black Sea from Ukrainian ports since the agreement signed in Istanbul went into effect.

The Russian leader alleged while giving an opening speech before the Eastern Economic Forum in Vladivostok on Wednesday that Western powers are acting “like colonial powers” and using the deal deceptively. He described that while Western officials decried Russia’s blocking food from getting to global south countries, such as in Africa or in Asia, the reality is that most of the ships to depart through the ‘safety corridor’ so far have ended up in Europe, according to his assertions.

The grain deal, finalized in late July, was preceded by months of EU and US officials decrying Moscow policies in blockading Ukraine’s coast, which they said would cause famine in the developing world – heavily reliant on grain from the region. The Kremlin response was to blame Ukraine’s military for mining its own ports.

“What we see is a brazen deception … a deception by the international community of our partners in Africa, and other countries that are in dire need of food. It’s just a scam,” Putin said.

Putin is accusing Ukraine’s Western backers of “cheating” by adopting the cause of poorer countries when it comes to public rhetoric, but in reality diverting food shipments:

“Only 3% of the grain being exported from Ukraine is going to developing countries, the majority is going to Europe… over the past decades European countries have acted like colonial powers, they are continuing to act like that today,” Putin claimed.

“Once again, they have deceived developing countries,” he continued, saying “it may be worth considering how to limit the export of grain and other food along this route.”

According to the figures offered by Putin during the speech:

Putin said, without citing a source, that only two of 87 ships, carrying 60,000 tonnes of products, went to poor countries, as he accused the West of acting as colonial states.

“That’s how it is – they were once colonisers and have remained so on the inside,” he said of European countries.

“Almost all the grain exported from Ukraine is sent not to the poorest developing countries, but to European Union countries,” Putin told an economic forum in the eastern city of Vladivostok on Wednesday.

“I will certainly consult on this subject with the President of Turkey, Mr. Erdogan, because it was him and me who worked out a mechanism for the export of Ukrainian grain,” Putin said. Putin and Erdogan are expected to meet on the sidelines of a regional summit hosted by Uzbekistan next week. China’s Xi Jinping is also expected to meet with the Russian leader.

CNN and Reuters have attempted to fact-check Putin’s words, and are rejecting his assessment:

In a statement to CNN, the United Nations said that under the Black Sea Grain Initiative, roughly 30% of “grains and other foodstuffs” have made it to low- and lower-middle-income countries, or approximately 700,000 metric tons.

If Russia indeed does either back out or attempt to renegotiate the UN grain deal, which required the assent of both the Ukrainian and Russian sides, as well as Turkey, this would mark the collapse of the only ‘bright spot’ to come out of negotiations thus far throughout six months of conflict. It would also no doubt add to growing global economic woes amid rising energy and food prices.