The ‘Real’ State Of The Consumer Authored by Michael Lebowitz via RealInvestmentAdvice.com,

Earnings for consumer staples and discretionary companies rely heavily on individual consumers’ financial health and sentiment. The recent bout of high inflation and negative real wage growth is taking a mental and financial toll on many consumers. In this article, we explore consumer staple and discretionary companies to see how they are navigating the inflation storm.

The differences we share in this article between consumer staples and discretionary companies differ from what often occurs in a slowing economy. That said, almost everything over the past two years has been different.

The State of the Consumer

Before walking through our analysis, it’s worth reviewing a few factors governing consumer spending.

Real wages (after inflation) have been declining for over a year.

To maintain consumption levels, consumers are drawing down savings rapidly. Personal savings are back to levels last seen five years ago. 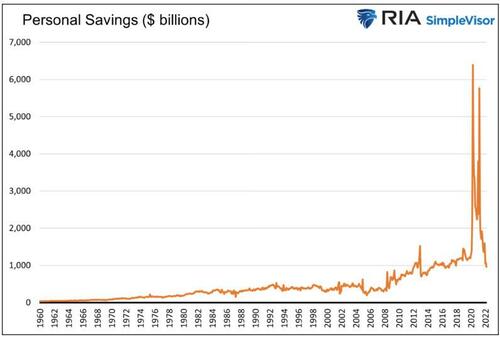 In addition to using savings, credit card usage is growing at the fastest clip in over 20 years. The three graphs tell us the story of many consumers. Their real wages are declining. To compensate they are increasingly relying on savings and credit. Both have limits, and many consumers are likely at or near those limits. As such, it becomes increasingly unlikely that consumers’ buying habits will remain as they are. Consumers will have some tough choices to make.

To help appreciate operating profit versus net income, we share Ford’s income statement. It shows that car sales and credit revenue minus the direct costs of producing and selling cars and auto loans sum to operating income in yellow. Beneath it, you will find the company’s other expenses and the resulting net income in green. In this analysis, we gauge recent changes in the operating profit margin for the top companies in the consumer staples and discretionary sectors. We do not care about the operating margin level but the change in the margin. We use the difference between the last reported quarter and the same quarter in 2021.

Consumer staples are broadly defined as companies that manufacture and distribute food, beverages, tobacco, and other essential household goods and personal products. Because many of these companies tend to make and or sell important and, in some cases, essential items, their sales are less sensitive to gyrations in the economy. Given the nature of their goods, they often have an easier time passing on higher prices to consumers than most other companies.

The graph below shows the annual change in the operating profit margins of the largest companies within the staples sector. We sort the graph by industry classification. 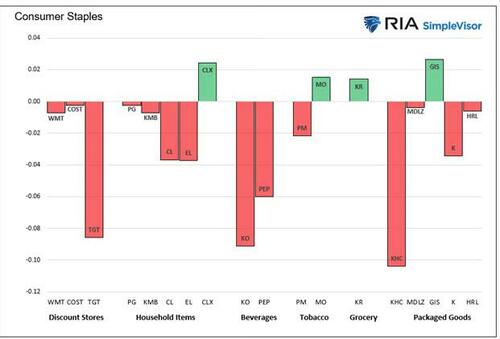 On average, margins fell by 2.34% over the last year. Target (TGT), Coke (KO), and Kraft Heinz (KHC) reported the most margin compression. Four of the companies were able to expand their margins.

This analysis allows us to compare companies conducting the same types of business. For instance, we found the margin changes of three of the largest big box retailers, Target (TGT), Costco (COST), and Walmart (WMT) is telling.

The bar chart above and the margin history below show that Walmart and Costco have maintained relatively stable margins. Conversely, TGT margins have fallen precipitously with higher inflation. The broad assumption is that Walmart’s and Costco’s management are better adept than Target’s in handling inflation and expense management in this new environment. Based solely on this data, we prefer to own WMT and COST over TGT if we are in a persistently higher and more volatile inflation regime. That said, Target executives may have learned some valuable lessons and are better prepared for inflation.

The following graph shows that the ability to manage inflation hasn’t been lost on shareholders. From April 1, 2021, to current, TGT shares have lost 17%. Over the same period, WMT shares are flat, and COST has risen by about 50%. 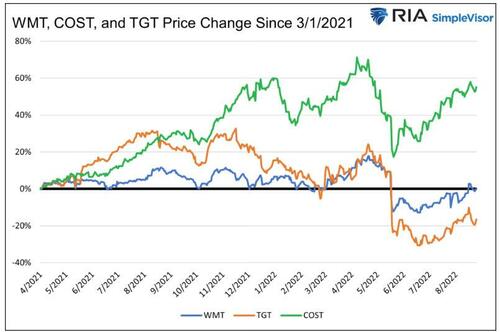 Unlike consumer staples, consumer discretionary stocks are more sensitive to economic gyrations. This sector includes auto companies, restaurants, homebuilders, travel, home improvement, and retail internet sales. Many of these companies sell goods that consumers can do without or easily substitute if prices rise. 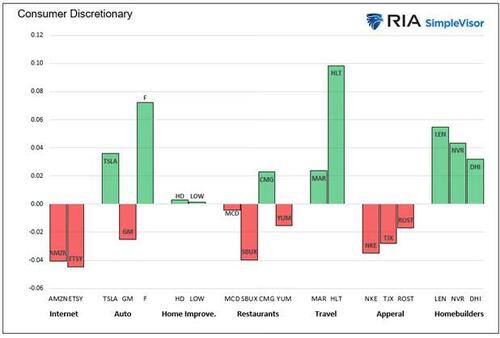 On average, margins rose by 0.73%, better than the average 2.3% decline for staples. Internet sales, restaurants, and apparel generally saw margin declines. Conversely, the homebuilders and travel sectors all saw margins expand. For the homebuilders, this is likely due to rapidly rising prices which outpaced the rising costs of labor and materials. The “return to normal” is allowing travel-related companies flexibility to raise prices. 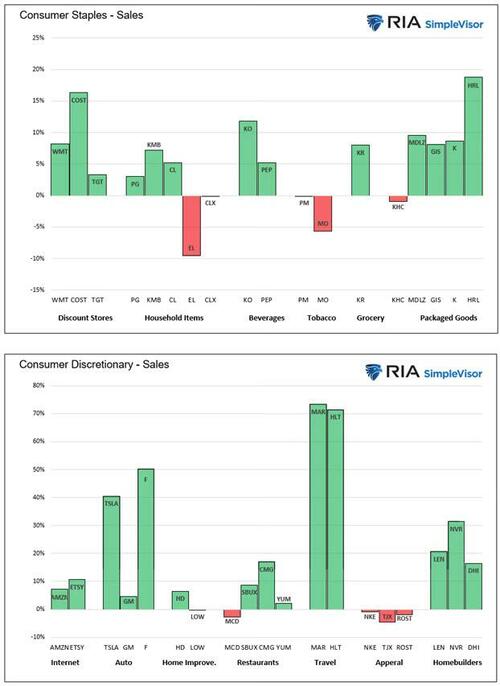 Some of the sales and margin outperformance in discretionary stocks is based on a resumption of everyday activities and “catching up” on spending from 2020. For instance, Marriot and Hilton saw 70% growth in sales as consumers started traveling again. Similar rebounds occurred in homebuilders and autos as savings and stimulus were put to good use.

Many consumers are now likely “caught up” purchasing discretionary goods and services.

Fiscal stimulus, credit card usage, and savings drawdown bolstered spending for discretionary items. While that tailwind benefited both staples and discretionary goods, from now on, the tailwind will slowly become a headwind. Credit cards must be repaid, and savings replenished.

Its likely consumers are going to have to make some tough decisions. Consumers are more likely to forgo purchases of discretionary items to help afford needed staples. If that proves true, margins and sales will likely hold up better for staples than discretionary stocks.

As we show below, the outperformance of staples over discretionary argues investors harbor similar concerns as ourselves. With credit card balances rising sharply and savings drawn down, consumers will likely need to become more savings conscious. Typically, in such an environment, discretionary goods are forgone in favor of essential goods.

Like the market, we will continue to favor consumer staples until the nation’s economic health and financial means of the average consumer improve.