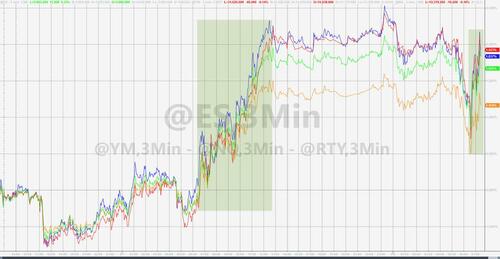 FinTwit has been awash with several charts that are in one way or another a reflection of this:

Sometimes, there’s a chart that just blows your hair back.

In 22 years of doing this, none stand out like this one.

This is 3x more extreme than 2008. pic.twitter.com/paqtIFxogE

Nomura’s Charlie McElligott has been ringing the bell on this for the last week and had some additional color to add this morning:

1) the magnitude of the absolutely biblical surge in “Negative $Delta” associated with not just Index / ETF Options (as downside Puts pick up Delta and Calls rot on the Spot selloff), but also with

2) Single-Stock “Premium Spent on Puts bot to open” – as an expression of just how much “kindling” has been built which was then risking an impulsive Spot Equities rally, due to said Options positioning squeeze

…which displays the aforementioned 2nd point above: the recent explosion in Single-Stock “$Premium Spent / Puts Bot to Open” on a weekly aggregated basis from OCC data, which we just take generically at the face value of what they say it is (I cannot confirm how OCC  they define B vs S etc)… 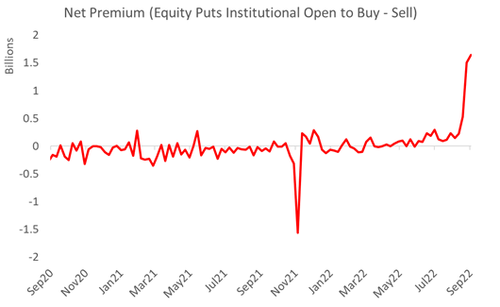 And as we bring all this “extreme Negative $Delta” from both Index / ETF and Single-Stock Puts bot-to-open “kindling for a Squeeze” together, we finally got a taste of that potential yesterday…and man, was it a doozy

So, what did happen yesterday?

McElligott writes that true to the “muscle memory” developed over the course of the 2022 Equities bear-market, on days where traders have walked in to see a “gap down” overnight just like yesterday morning, those have been the sessions where said traders have then immediately “mass unwound” / monetized downside bets, and-or covered dynamic “Short” hedges in futures / ETFs / single-name Equities, driving a reversal and big Spot RALLY off those overnight local lows.

And this then kicked-off a daisy-chain of further squeezing and Put destruction as Spot rallied still further, with Downside being melted and closed, at the same time that Upside bets moved ATM / ITM, which meant a SURGE in “Positive $Delta” as Dealer “short-hedges” were then covered, to the tune of a remarkable +$197.5B of implied $Delta added across US Equities profile Index / ETF Options 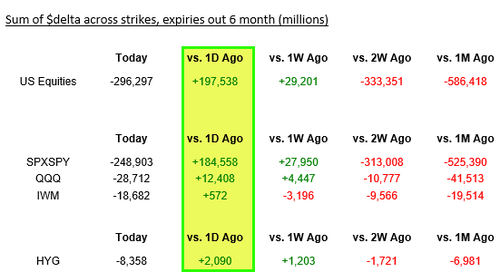 So what happens next?

McElligott concludes that from here, I do not have a massive “reversal and rally” in Equities as my base-case again so soon (unless Jerome Powell rocks us all and EASES FCI with some bizarro and inconsistent messaging, and / or some wildly weak CPI print next week).

However, the Nomura strategist notes two potential sources of UPSIDE “BUY” FLOW in the days ahead originating from the Systematic space which could further make us “susceptible to a squeeze”:

With regard to the first point, CTA global equity ‘net exposure’ is at extreme 11-year lows… 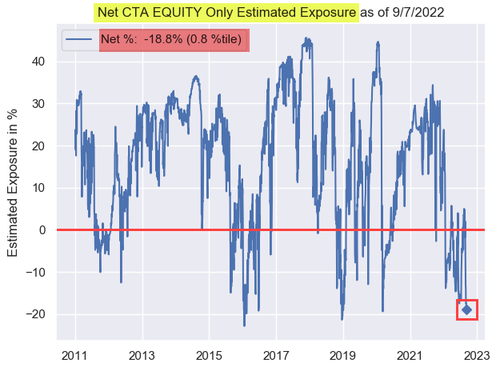 So what are the buy triggers if and when the ‘squeeze’ begins?

And finally, with regard the second upside “buy” flow, McElligott believes this vol-control will act as more of a stabilizing flow, rather than aggressive buying.