ARK Invest, Whose Flagship Fund Is Down About 55% YTD, Promotes Its Director Of Research To “Chief Futurist” 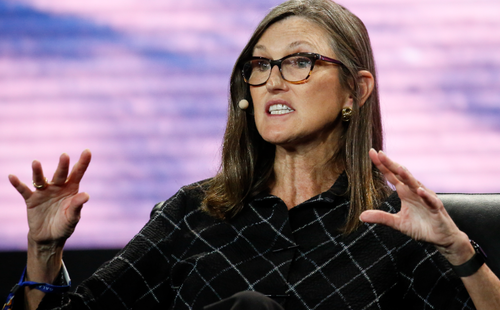 It looks as though ARK Invest is expanding its research department – and maybe that Cathie Wood, the firm’s head, could be thinking about eventually passing the torch…

That’s speculation for now, but Wood’s company, whose flagship fund is down about -56% year to date and closer to -66% over the last 12 months, put out a press release this week announcing two promotions (we think) of analysts that have helped oversee the firm’s performance over the last couple of years.

The company said in its release that it “plans to scale its Research Department, promoting Brett Winton to the role of Chief Futurist and four Senior Research Analysts to Director roles, and hiring five Research Associates.”

Was the title of “technoking” unavailable?

And what would an ARK Press Release be without a bombastic prediction from Cathie Wood herself? “According to our research, emerging innovation platforms will transform our lives and the global economy radically, potentially scaling their equity market capitalizations from $7-8 trillion today to more than $200 trillion in 2030,” she said.

Wood continued: “This reorganization will help us scale the team and develop deeper expertise in various research domains while surfacing convergences between and among technologies that are creating S-curves feeding S-curves. We believe this reorganization will strengthen the lines of communication between our research and portfolio management teams as ARK scales. To that goal, we will be investing in talent, adding five new Research Associates who will report to our newly appointed Directors.”

“Brett Winton, ARK’s Director of Research, will create and develop a unique role in the asset management industry as Chief Futurist…” the release continues.

Winton commented in the release: “Forecasting, dimensioning, and anticipating the impact of disruptive innovation will be essential for investors seeking superior investment returns over the long-term.”

He continued: “As Chief Futurist, I will drive ARK’s long-term forecasts across convergent technologies, economies, and asset classes. ARK will dimension the impact of this unprecedented technological boom as it transforms public equities, private equities, cryptoassets, fixed income, and the global economy.”

ARK also promoted Tasha Keeney, who has been seen tagging along with Wood over the last couple of years discussing the firm’s Tesla investment, to Director of Investment Analysis and Institutional Strategies.

Wood concluded: “I would like to congratulate each ARK team member for the extraordinary contributions that have led to their promotions. These changes will enable ARK to create a more scalable model with faster information flow, particularly insights that transcend sectors and technologies, ultimately allowing ARK to stay on the right side of change and invest at the pace of innovation.”

May we suggest “stopping the bleeding” as a topic for the first staff meeting with everybody’s new titles?