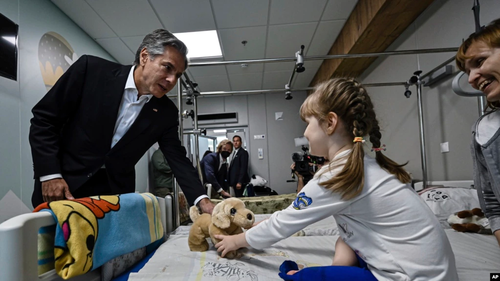 For the second time, US Secretary of State Antony Blinken has traveled to the Ukrainian capital of Kyiv on a surprise visit Thursday, where he met with government leaders, visited a children’s hospital, and unveiled yet another major military aid package.

This new package includes $2 billion in aid for not just Ukraine but other surrounding NATO countries and allies deemed “most potentially at risk for future Russian aggression,” according to Blinken’s words.

“In meetings with senior Ukrainian officials, Blinken said the Biden administration had notified Congress of its intent to provide $2 billion in long-term Foreign Military Financing to Ukraine and 18 of its neighbors, including NATO members and regional security partners,” the Associated Press writes.

The nearby countries “at risk” from Russian aggression were listed by the State Dept as follows:

Earlier in the day, Secretary of Defense Lloyd Austin announced a freshly approved military assistance package to Ukraine of of $675 million.

This brings US aid to Ukraine to $14+ billion, given that at the end of last month the Pentagon issued a statement saying security assistance to Ukraine since January 2021 has totaled $13.5 billion. At the end of August, the Pentagon reported that since January 2021, the United States has provided Ukraine with more than $13.5Bln in security assistance. Some reports are currently tallying the total at $15.2BN.

The surprise visit to Ukraine by Blinken, as well as Austin’s announcement, were timed to give moral support and momentum to Ukrainian forces amid their ongoing counteroffensive in the south. Austin hailed the “success” of the operation thus far, despite conflicting reports of how things are going on the ground, saying that “now we’re seeing the demonstrable success of our common efforts on the battlefield.”

Blinken’s Thursday visit was filled with visits to children, and featured photo ops with a bomb-sniffing dog…

Meanwhile, Zelensky has announced significant gains in the east. “In his daily late night address on Wednesday, President Zelenskiy said he had received news that his forces had liberated a slew of settlements in the Kharkiv region in a counter offensive that some Western analysts suggested had seen Kyiv recapture around 400 square kilometers (154 square miles) of territory,” Reuters writes.

Ukrainian and Western sources are reporting the eastern counteroffensive in particular as a success quickly gaining in momentum.

(WSJ) – Ukraine’s military advanced as much as 30 miles in the country’s east and liberated more than 20 villages and towns, a senior commander said, in a rapid thrust aimed at cutting Russian supply routes.

“This week we have good news from Kharkiv Oblast. All of you have most likely seen reports about the recent activities of Ukrainian defenders,” Zelensky said. “And I think every citizen feels proud of our warriors.”