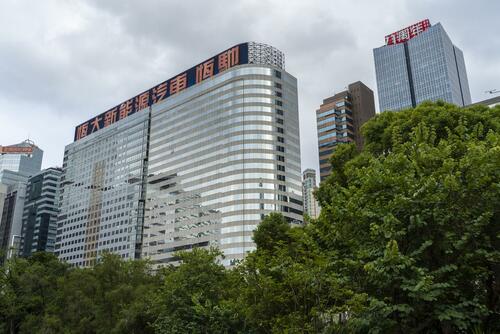 It may not have been China’s Lehman, but just like Lehman, Evergrande’s sprawling headquarters now belongs to someone else: according to the FT, Evergrande’s Hong Kong headquarters building has been seized by a lender after the struggling Chinese property developer defaulted on a loan and twice failed to sell the building.

The lender, whose identity has not yet been confirmed, informed Evergrande earlier this week that it had appointed a receiver to take charge of the property, which is valued at $1.2 billion. Citing four sources, the FT notes that the lender had security over the China Evergrande Centre – a 26-story tower near the city center of Hong Kong island – which allowed it to take charge of the asset.

Evergrande had reportedly pledged the building in exchange for loans from a consortium of lenders led by China CITIC Bank International, the HK-based subsidiary of the Chinese state-owned bank. The unnamed lender had appointed receivers from restructuring firm Alvarez & Marsal.

Last September, as an Evergrande default loomed, CITIC Bank told its investors that its loans to the developer were pledged against valuable security, although it did not provide further details. We now have a hint what said security may have been.

Evergrande was infamously the most prominent developer to default in 2021 as a liquidity crisis gripped the Chinese property sector. It told creditors in January that it would unveil a preliminary plan by the end of July to restructure its $300 billion of liabilities, which include $20 billion of offshore bonds, but it missed that deadline and instead said it had only made “positive progress” toward a proposal.

The property developer had twice attempted to sell the tower. Last October, Chinese state-owned Yuexiu Property pulled out of a reported $1.7 billion deal to buy the building over concerns about the developer’s financial situation. It put the headquarters back on the market in July, attracting a number of bids including from Li Ka-shing’s Hong Kong property developer CK Asset Holdings. However the sale again fell through because the bids were too low, reflecting Evergrande’s desperate need to raise cash.

Evergrande has been divesting assets including property and its stakes in companies in a bid to repay some of its creditors. Its chair has also put his personal assets up for sale, including private jets. This week, Evergrande said it would sell its remaining stakes in China’s Shengjing Bank for $1.1 billion.

The developer, which is listed in Hong Kong but whose shares have been suspended from trading since March, has not yet informed the market that a receiver has been appointed over one of its large Hong Kong assets. Earlier this year, Oaktree Capital, a $158 billion American asset manager, seized two of Evergrande’s prized assets after it defaulted on loans that totaled around $1 billion. The assets were a large development site in Hong Kong, where Evergrande’s chair Hui Ka Yan had intended to build a Versailles-like mansion and a sprawling residential and tourism resort near Shanghai called “Venice.”