“An Ugly Thing To Watch” – China Is Facing An Employment Crisis 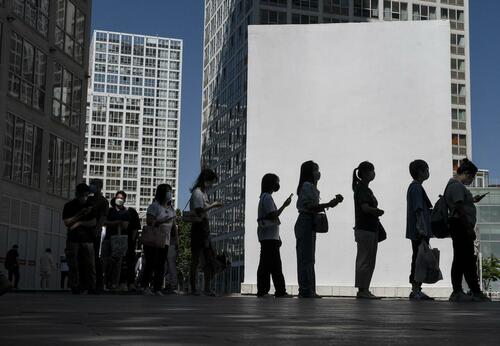 The implosion of the real estate sector has stalled the Chinese growth machine. As a consequence, unemployment is rising. Western consumer goods companies with a significant presence in the country will feel the knock-on effects.

The projectile that was the Chinese economy has slowed and turned back toward earth. The Zero Covid policies and the real estate crisis brought China’s economy to an unnatural equipoise, seeming to hover in a no-growth zone for a few quarters.

Now, having failed to reach escape velocity, the rocket ship has turned around. The growth inversion will be an ugly thing to watch: millions of Chinese unemployed, crashing demand.

Back in the late 1990s, foreign visitors to China were bowled over by the GDP growth rates: 15%, 17%, and with low inflation. Rural people moved to the coast to live in factory dorms and work 80 hours a week making widgets for the world. Farmers planted cash crops and sold the produce in «free markets» that had opened across the country then took the money home and built themselves new houses.

For decades, the country had been held back, in poverty, with high levels of savings but no investment in industry or infrastructure. Suddenly, all that changed. Commerce became possible. Everyone’s lot in life was improving.

It was a great run: thirty years of optimism, thirty years of investment-fueled growth. The machine sputtered in 1998 and then in 2008, but leaders doubled, tripled, and quadrupled down, flooding the economy with investment capital.

When government leaders feared crashing international demand in the global financial crisis, they responded by pouring resources into real estate. Where the investment of the previous decades had largely gone into road, rail, telecom, and computerization that improved productivity, after 2008, the government force-fed the economy on capital to keep the economic machine going, and productivity sputtered.

It was going to take just a gentle push to make it all end, and that came with the property crash in summer 2021. Now, the news is all about unemployment. The government reports that about one-fifth of young people under 25 who are seeking work cannot find any. Although statistics on employment among older people are opaque, occasional independent surveys in the countryside indicate high levels of unemployment. Civil servants in the wealthiest regions are taking massive pay cuts.

Foreign investors have long taken a view that only 350 million reasonably prosperous people in the coastal cities matter to the economy. But even these wealthier people are seeing employment erode: banks, private education, brokerages, and other white-collar industries are laying off major portions of their workforce. The press is full of reports of layoffs in tech companies. The pharmaceutical sector is bleeding staff. Individual income tax receipts are falling.

The shuffling of feet is turning to a stampede. Formerly mighty companies like Tencent are selling off parts. Warren Buffett’s Berkshire Hathaway is selling down its stake in EV maker BYD. The founder of Huawei told employees that the company must focus on «survival.» Chinese real estate companies listed in Hong Kong reported that their earnings have declined by 87% so far in 2022.

To combat this, Chinese banks are furiously lowering rates and pushing out loans. The central bank is fighting the decline of the Renminbi, apparently spending down its stock of foreign exchange reserves but predicting that Renminbi will soon crest the long-feared 7:1 exchange rate against the U.S. dollar.

An «unemployment rate» is all but meaningless in a country that has not adapted to the workforce changes post 1995. China does not count rural people (about 60% of the population) or most gig workers. It accounts very poorly for people who do not have labor contracts—which is most of the migrants working in cities. We also know China will do its utmost to hide distress from the outside world.

Smartphone sales are falling sharply. Nike is gloomy. Starbucks saw a 40% drop in sales in the most recent quarter. No more will China be the capital of luxury spending. And demand for commodities like coal and copper and iron ore is already tumbling.

Executives based in China will be the last to admit the problem. People like the CFO of Adidas continue to profess «commitment» to the Chinese market. One wonders whom they are trying to convince.