How Much Time & Money Does The UK Need? 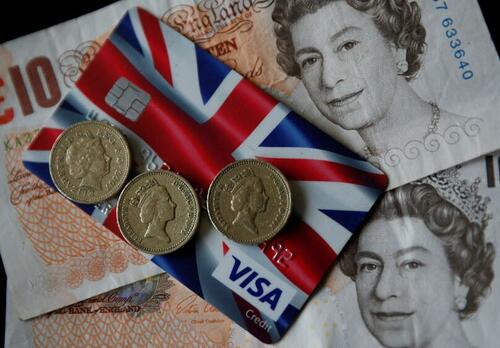 Authored by Bill Blain via MorningPorridge.com,.

“So much for handouts then…?”

The UK’s finances depend on how long energy security remains compromised, and whether the new Truss government can convince markets to fund that time.

This is going to be an extraordinary week for the United Kingdom.

Life and markets go on. The upwelling of love and respect for Queen Elizabeth and the ardent hopes we are wishing for the reign of King Charles, are serving as something of a distraction from the economic reality facing the nation. Inflation, recession, and energy uncertainty will continue to roil the reality. Cynics may argue new Premier Liz Truss’ decision to tour the UK with Prince Charles this week is in the hope some of his new found lustre rubs off on her. And why not? She will need it.

For all my doubts about our New Government, I shall happily tip-my-hat Truss and Chancellor Kwazi Kwarteng for getting the Energy Cap in place last week. Extraordinary times require extraordinary measures.

There was no practical alternative – the government has committed to hold down consumer and SME energy bills while the Energy crisis continues. Doing so will remove economic misery for millions. It reduces the recession risk, and will bring down the inflation headline. No numbers have been provided, but it’s reckoned to put a £150-200 billion hole in the state finances over the next year that can only be covered by additional borrowing.

That raises all kinds of concerns about the UK’s financial stability: for how long can the nation afford it?

The first critical issue is how long the energy crisis continues?

Short-term the crisis is about disrupted Energy supplies from Russia over the Ukraine War. That is unlikely to change. The news from Ukraine suggests a major Russian reverse – but that simply adds a degree of uncertainty on what an enraged and unpredictable Putin may do. The risks of Russia using tactical nukes on the battlefield, hypersonic missile strikes on energy nubs and nodes, and cyber-strikes on European grids and energy infrastructure are elevated.

Medium-term, energy shocks tend to be short-lived as new sources of alternative energy supply are innovated and brought online – everything from imported gas, bulk electricity purchases and increased fossil fuel, plus government programmes on home energy saving, will come online. The big concern is whether Europe can avoid power rationing and cuts, and how deep the energy damage to the economy will go.

Long-term, energy prices will normalise. Europe will establish a new Energy Secure economy – and Russia will be scrabbling to sell its energy to a monopoly buyer – China, which is unlikely to want to pay the market rate.

The second critical issue is can the UK afford it?

The current volume of UK Gilts outstanding is £2.174 billion. The financial wires and commentariat are saying there simply isn’t the willingness for investors  to fund the uncapped expense of the new Energy Cap via the Gilt Market. There is a price for everything. The reality is the UK can issue gilts to its heart’s content – but will have to accept whatever price the market is prepared to pay. That price depends on supply and demand, but also on intangibles – like how do investors rate the UK’s Virtuous Sovereign Trinity – its political outlook and stability, the factors acting on sterling, and a judgement call on the stability of the national debt.

To issue £150 bln of additional gilts, at a time when the Bank of England is raising rates, and a recession looms… Tough! There are alternatives. The Bank of England can, using the well-worn QE route to money printing, act as buyer. Another trick is to draw in buyers – like announce to banks and institutions they can borrow directly from the Bank against their Gilts – same effect.

And there is always the ZONK.

The Zonk is a small UK coin no one ever heard about till now, one of which will be uniquely minted on the instruction of the UK Treasury to feature the face of King Charles (facing the opposition direction to the Queens face on old currency).

The Zonk will have a face value of £1 trillion. It will be used to purchase the £838 billion – the current Gilt Holdings of the Bank of England, plus an additional £172 bln special gilt sold directly to the Bank to finance the Energy Cap. The Zonk will remain on the balance sheet of the Bank of England representing the repaid UK government borrowing. It solves the accounting conundrum and its not inflationary.

The past weekend highlighted a key truth to me personally. It’s not nations, the big institutions, or companies that make bad decisions – its individuals. Folk make the wrong decisions because they are trying to make the right ones. That’s life.

Back in the Victorian era the right thing to do was show deference to aristocracy and royalty, and spend years in mourning. This weekend many Sporting Events across the UK were cancelled as “a mark of respect”. Its increasingly clears thats been a big mistake. It would have been better to encourage the crowds to gather, and sing our unfamiliar old new anthem “God Save the King”. I was supposed to be sailing in a classic yacht regatta which was cancelled – despite how far many teams had travelled. The local sailing club commodore declared no racing – but we went out on our dinghies to do a Sail-by of all the yacht clubs on the river.. (Two boats heading the same direction is defintionally a race… ahem.)

Why was the nation effectively closed for the weekend? No one believes it was because that’s what the Queen would have wanted. Was it because the courtiers in the palace are still of the paternalistic mindset of a 100 years ago? Because there is bias to do what was done last time? We need to think about these things. Nations evolve.

And finally – a Rant: BUPA MUST DIE

I have a new firm to add to my curse list. BUPA.

Two weeks ago I was playing with the dog, and jumped up from the floor – triggering a minor ache in hip. Didn’t think much of it. Last week I was coming back from London, and ran to catch the train at Waterloo. I slipped, stretched my leg/hip, and was immediately hit by blinding agony. Ouch.

I didn’t bother trying to get a GP appointment (impossible in our village), but went to see the physio in the Gym straight away. He took a look and concluded I needed an immediate ultrasound as he thought there may be a risk of opening a hernia and to know who much damage I’d done in order to treat it. He was able to book me an appointment at the local private Nuffield with a top sports injury practioner.

I called up our company health insurance – Bupa. They don’t answer the phone anymore. I had to go online through a chat bot, which eventually connected me to a person for an online chat. It took ages – and is a highly inefficient was to communicate. I explained what had happened and asked from the go-ahead for the urgent ultra-sound and consultation.

The Bupa operative went blank for a while, and then came back saying that because the initial injury happened 2 weeks ago – while playing with the dog – the injury I was seeking authority for was therefore a “pre-existing” condition, and would therefore not be covered unless I can get a letter from my GP confirming it was not a pre-existing condition. I explained I was in pain, that a physio had told me a scan was urgent to check on the potential hernia risk, and that everything was available. I might take me weeks to get to see a GP.

That is the basis of private medicine. You get treatment – but only if the insurance company can’t find a way to weasel out of its obligations. Despite the money my firm pays for my cover – I was effectively denied treatment.

I am going to speak to a lawyer later today about suing the daylights out of BUPA for breach. I went for the appointment and uncovered some bruising on the muscle, but no sign of a hernia – which is a great relief. My new mission in Life will be the Destruction of BUPA.