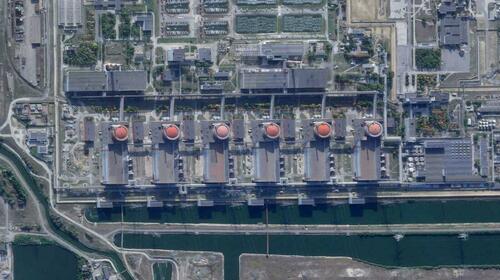 The last nuclear reactor operating at a Russian-occupied plant in Ukraine was shut down after a power line connecting the facility to the grid was restored late Saturday.

Global concerns about a possible meltdown at the six-reactor Zaporizhzhia nuclear power plant (ZNPP) have mounted since late February, when Russia invaded Ukraine—home of the infamous Chernobyl disaster. The nations have accused each other of shelling the facility. Zaporizhzhia—Europe’s largest nuclear station—had been operating in “island mode,” with the sixth reactor generating the electricity required to run necessary cooling systems, after being disconnected from the grid.

Energoatom, the state-run operator of Ukraine’s four nuclear facilities, said that once a backup line was restored “to its operational capacity” Saturday, “a decision was made to shut down power unit No. 6 and transfer it to the safest state—cold shutdown.”

The International Atomic Energy Agency (IAEA), the United Nations nuclear watchdog with two experts at the power station, confirmed the shutdown in an emailed statement to The Associated Press on Sunday.

“After yesterday’s restoration of the power line—which connects the ZNPP to the switchyard of a nearby thermal power station—the operator of the ZNPP this morning shut down its last operating reactor, which over the past week had been providing the plant with the required power after it was disconnected from the grid,” the statement said. “IAEA staff present at the ZNPP were informed this morning about these new developments, which were also confirmed by Ukraine.”

As the news agency noted:

Energoatom said the risk remains high that outside power is cut again, in which case the plant would have to fire up emergency diesel generators to keep the reactors cool and prevent a nuclear meltdown. The company’s chief told The Associated Press on Thursday that the plant only has diesel fuel for 10 days.

The IAEA’s director general, Rafael Grossi, said Sunday that “I remain gravely concerned about the situation at the plant, which remains in danger as long as any shelling continues. To address this serious situation, consultations have begun on the urgent need to establish a nuclear safety and security protection zone.”

Grossi on Friday had called for an “immediate cessation of all shelling in the entire area” and the creation of a safety zone, adding that “this is an unsustainable situation and is becoming increasingly precarious.”

In his nightly video address on Saturday, Zelenskyy highlighted recent gains by Ukrainian forces, saying that “the Russian army in these days is demonstrating the best that it can do—showing its back.” As U.S. Secretary of State Antony Blinken on Thursday met with Zelenskyy in the Ukrainian capital Kyiv and announced billions of more dollars in military aid, global peace groups renewed calls for diplomacy.

“The White House and Congress are fueling this war with a steady stream of weapons instead of pushing for talks to end the conflict,” said Medea Benjamin, co-founder of the peace group CodePink. “That’s why we, the people, have to rise up with a demand of negotiations, not escalation.” CodePink and other anti-war groups plan to launch a global week of action for peace in Ukraine on Monday.