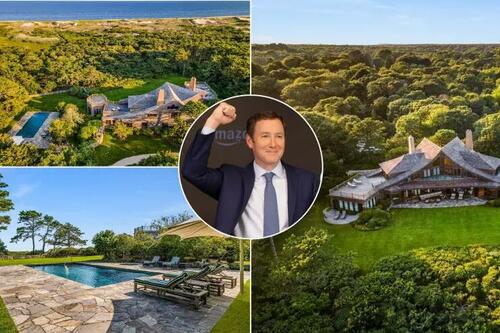 A year ago, Peloton was valued at $4.15 billion. The company which sells $2K exercise bikes with an ipad superglued up front is now seeking a valuation of $8 billion or more.

… keep on coming, and this time from the very top because as Peloton announced after the close, the company’s Executive Chairman and co-founder John Foley became the latest in a long line of corporate departures, stepping down from the fitness company as part of a leadership shake-up, extending the turbulence at a business trying – and failing – to pull out of a deep slump.

Foley, who helped start Peloton in 2012 and served as CEO for 10 years, is resigning effective Monday, the company said in a statement. Foley took the executive chairman role in February when he handed the reins to CEO Barry McCarthy, a veteran of Spotify and Netflix.

Amusingly, Foley’s follies have tracked him away from the company: earlier this year he scrambled to sell his East Hampton oceanfront mansion…

… which he bought just a few months earlier for $55 million after a relentless stock selling campaign which saw him offload more than $100 million in PTON stock at much higher prices. Well, at least someone made money on the brief rise and tremendous fall of Peloton.

It’s not just Folley though: as Bloomberg reports, Chief Legal Officer Hisao Kushi, another co-founder, is also headed for the exits. He’ll be replaced in that role by Tammy Albarran, who was recruited from Uber. The chairman role, meanwhile, will be filled by Karen Boone, a former Restoration Hardware executive who currently serves as lead independent director.

The reshuffling is the latest high-level shock at New York-based Peloton, which soared in the early days of the pandemic, but is now suffering from crashing sales and staggering losses. Its shares are down about 90% over the past year, and the company has struggled to – no pun intended – make it across a steep upward climb of excess inventory.

As part of a turnaround plan, McCarthy cut thousands of jobs and offloaded operations to third-party providers. But  Peloton’s quarterly report in August signaled that his comeback effort woefully insufficient.

While McCarthy’s goal to make Peloton cash-flow positive in the second half of the coming fiscal year is admirable, it is also wildly unrealistic according to markets. “We continue to make steady progress, but we still have work to do,” he said last month, while acknowledging that the company’s financial performance may cause some to doubt the “viability of the business.”

With Peloton’s longtime CEO now out of the picture, McCarthy may have a freer hand to make changes. The executive has said the company should prioritize its digital offering over hardware and is exploring allowing subscribers to beam content from their smartphones to non-Peloton fitness equipment.

Finally, Peloton’s Chief Commercial Officer Kevin Cornils is also leaving and won’t be replaced. Some of Cornils’s responsibilities will be assumed by Dion Sanders as he takes the role of chief emerging business officer, according to an internal memo from McCarthy reviewed by Bloomberg. Chief Content Officer Jen Cotter will assume control of apparel and accessories, showing that the company remains committed to that market.

Peloton investors initially applauded the changes, sending the shares up as much as 5.3% to $11.64 in extended trading on Monday. But the rally soon evaporated, with the stock declining more than 2%. 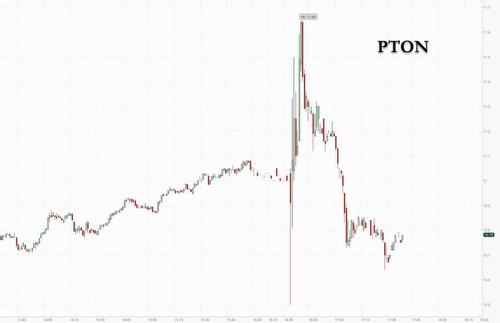 The question is at what point do markets agree there is more value for the inventory in bankruptcy than as a going concern?