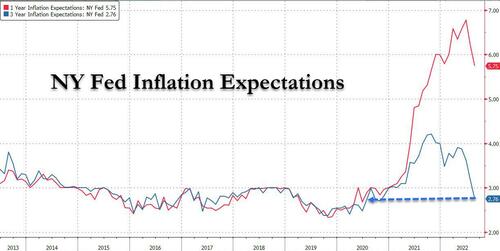 Ahead of tomorrow’s CPI print, Wall Street is split between those who say tomorrow’s inflation data is fully priced in and won’t have an impact on either stocks or the Fed which won’t ease until the breadth of price increases comes closer to the Fed’s 2% goal, and those who – echoing recent comments from the Fed – believe that the CPI is all that matters for the Fed’s upcoming rate decision, even though odds of a 75bps rate hike in two weeks time are just over 90%.

Among the former is Goldman trader Matt Fleury who quotes Bullard’s comments from last week, namely that a good CPI report shouldn’t affect the Sept Fed call, and notes that “he is exactly right… We are priced for 75bps already. CPI doesn’t matter. People who don’t have enough length will tell you it does, but it doesn’t. Its priced. The asymmetry is higher here” and is why this traditionally bearish Goldman trader predicted that “we might be starting the Q4 chase early.”

But while there may be disagreement over how the market or Fed will react to the CPI, there appears to be agreement that the August inflation print will miss to the downside (by a little or a lot), if mostly at the headline level thanks to plunging commodity prices (core inflation may actually shit higher as Americans shift spending on items such as food and gas into “core” inflation). There is also agreement that whatever the BLS deems the proper CPI number, “it is unlikely that it will reflect what we see and feel every day” as Peter Tchir put it, adding that it also “doesn’t tell us anything about where September will be (actually, that is not true, as some of the data will be so off, that it will have to get fixed in next month’s report, and some is just stale by its nature (housing).”

Some more hard truths from Tchir on CPI’s 15 minutes of fame:

The reality is that CPI, away from quirks in how it is calculated (the all-important housing component might be the quirkiest off the quirky, but heuristic adjustments, how prices are measured, etc.) all impact the number that we will be given, but don’t really impact the inflation we have. And again, it doesn’t tell us much about the future of inflation.

As we sent out on Friday, the market has concluded that both the ECB and even the Fed, despite their protestations otherwise, are both being viewed as data dependent.

Most importantly, the Academy strategist “cannot see any scenario, where the market doesn’t decide that CPI is heading the right direction and that October will be lower than September and so on and so forth (so many commodity futures contracts that I checked out are all lower forward than spot).”

Indeed, one look at not just today’s unexpectedly low NY Fed consumer survey inflation expectations for both the 1 and 3Y horizon…

…. but also 3Y breakevens which have dropped to a nearly two year low…. 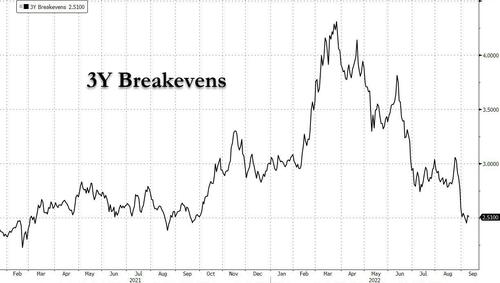 … as well as two-year inflation swaps… 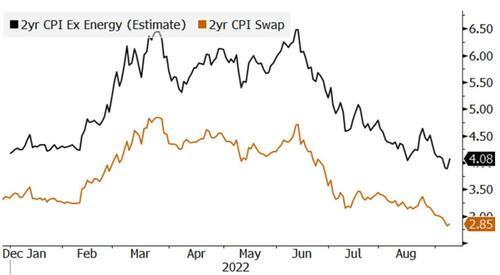 … now suggesting CPI will average less than 3% in the near term (excluding energy the market expects prices may still grow near 4%.)

There is another reason why it is clear that the market is now convinced that peak inflation is behind us and tomorrow’s CPI print will likely miss: stocks and bonds have gained in tandem as economists expect the first negative monthly reading in more than two years, even though as noted above but core inflation is still expected to post an increase in August while the y/y index of underlying prices is set to tick up back above 6% from 5.9% previously. Core inflation is then expected to stay around that level through early 2023 as rents will keep the core rate high (remember what we wrote in August 2021, when conventional wisdom was still that inflation would be transitory: “What Rental Hyperinflation Looks Like: “Soaring Prices. Competition. Desperation“”).

Another measure to watch, according to Bloomberg’s Tatiana Darie is the share of the CPI basket that is rising more than 4% on an annualized basis: July saw a drop to 71.8% from June’s high of 74.8% as three-quarters of prices are rising faster than their 5-year average. The direction and speed of these gauges will also tell us a lot about the inflation outlook.

After that long preamble, here’s what Wall Street expects tomorrow for the August CPI:

there are 39 estimates on Bloomberg (compared to 72 estimates for this month’s NFP data). The range is incredibly narrow (7.9% to 8.3% for YOY).

Here are some of the more indicative examples:

Some details from the bigger banks, starting with Goldman (full note available to pro subs, along with a bunch of other pre-CPI reports):

“We estimate a 0.32% increase in August core CPI (mom sa), which would boost the year-on-year rate by two tenths to 6.1%. Our forecast reflects a further drop in airfares on the back of lower oil prices (we assume -5% mom sa) as well as net softness in autos categories (new +0.75%, used -1.25%, parts flat) due to easing supply chain constraints and the arrival of 2023 model years on dealer lots. However, we expect continued strength in services inflation due to wage pressures, labor shortages, and elevated short-term inflation expectations. Specifically, we look for a strong set of shelter readings (rent +0.65% and OER 0.55%) and a 0.6% rise in education prices due to higher tuition and daycare costs for the new school year. We also expect another gain in car insurance, as carriers push through price increases to offset higher repair and replacement costs. We estimate a 0.13% monthly decline in headline CPI, reflecting lower gasoline prices but higher food prices.” 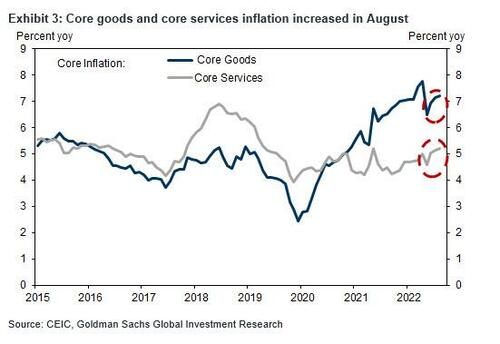 All eyes on CPI tomorrow @ 8:30am. Interesting dynamic in sense Fed essentially preannounced 75bps @ 9/21 meeting when THIS Nick Timiraos (fed’s mouthpiece) article dropped last week. Market clearly wants/expects a cooler headline print w/ recent sharp decline in gas prices. Street is braced for core print to remain stickier (and even tick slightly higher). Headline number most likely shows some disinflation and wont impact mkt meaningfully after tape’s recent run higher (unless shockingly cool…call it sub 7%…then keep your rally caps on). If we get a surprise hotter reading of >8.5% (prior) mkt likely gets hit by at 100+bps.

Here’s JPMorgan forecasting that “in-line print that indicates a second consecutive MoM decline would be supportive for equities” while “a 7-handle CPI YoY (exp. is 8.1% so certainly not unthinkable) we would likely to see a strong rally tomorrow:

Andrew Tyler: We have seen new shorts added with some sub-sectors back to YTD highs in terms of  short interest. If this market continues to move higher does a squeeze take us back to 4300 level into earnings season? If so, it will start with CPI on Tuesday (Headline YoY +8.1% exp.; +8.5% prior. Headline MoM -0.1% exp.; 0.0% prior) where an inline print supports a move higher. Should Headline CPI YoY print with a 7-handle, then think we see a very strong day for stocks. Given light positioning and low liquidity, we could see another sharp rally coming out of CPI.

Mike Feroli:, “We estimate that the consumer price index (CPI) was basically unchanged in August. With this soft headline print, we think the year-ago inflation rate will moderate from 8.5% in July to 8.1% in August. We expect the monthly changes in the main details of the report to be pretty similar between July and August, with a drop in energy prices being offset by gains in food and core prices. We forecast that the energy CPI fell 5.6% in August while the food CPI rose 0.9% and the core index increased 0.33%. If our forecast is correct, the year-ago rate for the core CPI should pick up from 5.9% in July to 6.1%.”

Ultimately, while a miss tomorrow will likely unleash market animal spirits, in the grand scheme of things it will not really change the big picture: even assuming sequential inflation growth slows to a trickle, the chart below from BofA shows how long it will take for inflation to normalize on an annual basis. 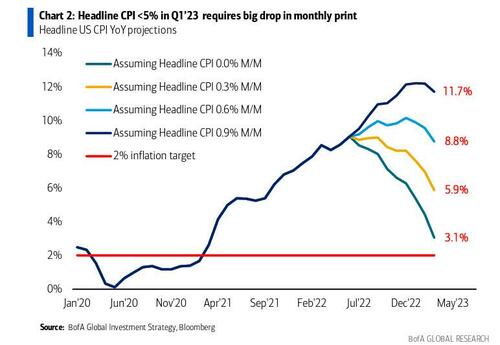 Bottom line: an line print will be supportive; a big miss – especially if it is a 7-handle Y/Y stocks will fly, while a big beat will – predictably – hammer stocks. As for the Fed, barring a major surprise, tomorrow’s report isn’t expected to alter the Fed’s outlook until the breadth of price increases slows further and comes closer to the Fed’s 2% goal. And the St. Louis Fed’s James Bullard told us that 75 bps this month is still on the table despite a “good” CPI report.