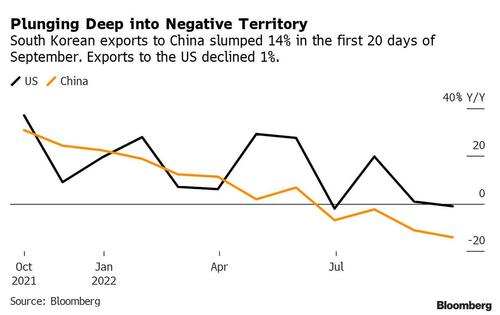 Chinese exports are poised to slow further in the remainder of 2022, with various high-frequency datasets pointing to cooling global demand. Exports, a key growth engine that has lifted the Chinese economy since the pandemic, are sputtering. That could bring more bad news for the yuan.

South Korean data in September through the 20th suggest exports to China fell 14% year-over-year versus a 1% decline in exports to the US. This may be an ominous sign that global demand for consumer goods made in China — to which Korea provides inputs earlier in the supply chain — is softening, Neil Shearing, group chief economist at Capital Economics, wrote on Monday. Hong Kong’s exports also sank 14.3% in August, the most since the pandemic first began in early 2020.

Plunging freight rates also point to cooling exports: A 40-foot container from Shanghai to Los Angeles fetched $3,779 last week, below $4,000 for the first time since September 2020 and half what it was three months ago, Bloomberg reported. More declines are expected in the coming weeks, according to Drewry Supply Chain Advisors.

The news couldn’t come at a worse time, with the offshore Chinese yuan now trading at the weakest since May 2020 — just a stone’s throw away from its record low — and economists rushing to cut China’s 2023 economic-growth forecasts. Dollar-yuan may need to go a lot higher to boost China’s exports meaningfully; the Chinese currency has advanced versus most of Beijing’s trade partners, outside of the US and Hong Kong, for much of 2022. 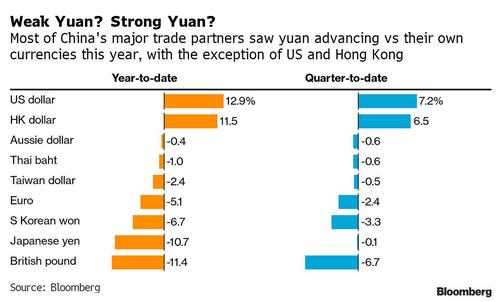 Chinese exporters already are holding foreign currencies more tightly. The conversion ratio — which measures the share of export revenues converted into yuan — fell from 57% in the first eight months of 2021 to 36% this year through August, according to Macquarie economists Larry Hu and Yuxiao Zhang. If that ratio holds steady, an extra $118 billion could have been sold by exporters into yuan, Macquarie estimates.

Falling Chinese export volumes and expectations of a weaker yuan will only make exporters more reluctant to sell their dollars. The yuan’s downtrend isn’t likely to reverse unless that negative feedback loop is broken.