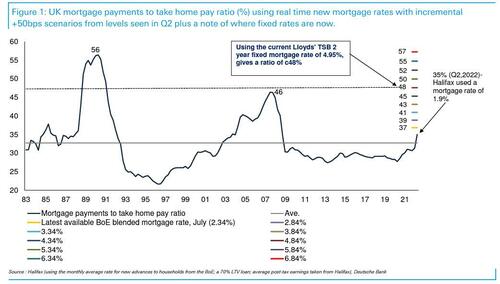 Earlier today, we described the main reason why the BOE panicked – which, with billions in pensions set to suffer catastrophic losses absent an intervention, perhaps merited the latest central bank bailout. There is another reason why the central bank stepped in.

The note served for Reid’s latest Chart of the Day, and shows the ratio of UK mortgage payments to take home pay. The colored lines and numbers look at where this would go if you moved rates up in 50bp increments, relative to the last published version of this chart which used an average new mortgage rate of 1.9% in Q2.

So at these levels, this would send affordability to worse levels than that seen during the GFC and within a couple of percentage points of the peak in the late 1980s/early 90s when the UK saw a savage house price crash. The report (available to pro subscribers ) also shows that in aggregate, we’re already around those levels for London.

Of course, not every mortgage needs to be refinanced today so these rates have time to change before most refinance. However, unlike the US where a 30-year fixed market dominates, the FCA suggested in August that 26% of the total outstanding UK mortgages  are variable rate and thus dependent on where the BoE’s bank rate is. It is currently 2.25% but markets are now pricing in a terminal rate above 6% which would be a huge shock if it got close to happening over the next 6-9 months as is priced in. 74% of mortgages are fixed (mostly between 1-2%), and half of these will need to be refinanced within the next 2 years, with half at a fixed rate beyond 2 years (but rarely beyond 5 years).

So 26% of mortgage payments are at risk of imminent increases, 37% at risk over the next two years if rates don’t rapidly fall, and 37% can ride out this storm for a few more years.

As Reid concludes, while much can change very quickly in politics and markets, if markets are correct, “the UK housing market is in for a huge amount of pain ahead,” unless the BOE were to somehow monetize all the upcoming debt issuance and sends rates back to zero.