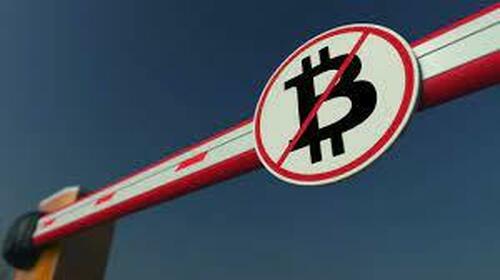 Authored by Gerard Scimeca via RealClearMarkets.com,

The laws of physics dictate that nature abhors a vacuum, an interesting phenomena considering how many federal regulatory agencies simply love one. Harkening back to the New Deal, it has become accepted that wherever a gap may exist in the regulation of human activity, a federal agency will soon appear, mobilizing its vast and frequently questionable powers to fill the space.

Whether it is the Department of Energy deciding to pull the plug on a popular type of light bulb, or the Environmental Protection Agency dictating the allowable volume of water in toilets, our vast administrative state lurks behind every corner, poised to assert itself within every nook, crevice, and cranny that presents an opportunity for regulatory interference. Last year federal agencies created over 74,000 pages of new rules and regulations to fill the perceived vacuums in our lives, and we are currently on track this year to surpass that tree-crushing total.

As frustrating — and costly – as never-ending meddling from Washington bureaucrats can be, light bulbs and plumbing are small potatoes compared to the mayhem that erupts when an agency jumps the median to rewrite the entire rulebook for an industry to which it is, at best, a casual acquaintance. Just over a year ago our organization sounded the sirens on a lawsuit by the “stone-age” bureaucracy of the U.S. Securities and Exchange Commission (SEC) against an American crypto company, Ripple Labs. In that time an overwhelming consensus has emerged among crypto industry leaders, analysts, and legal scholars that the SEC’s lawsuit is not only absurd, but extremely dangerous.

Imagine the reaction to a referee throwing a penalty flag on the field for a play that happened 30 minutes ago. There would certainly be a healthy mix of incredulity and outrage, and the strong view the official is irrationally and arbitrarily ruining the game. The SEC lawsuit against Ripple is just as irrational and arbitrary, but the stakes involve billions of dollars held by innocent users of the digital currency XRP as well as the larger issue of federal agency overreach, and their power to capriciously extend their tentacles into places where they do not belong. The outcome of the case will further have a substantial impact on America’s position within the exponentially growing digital currency markets.

In December 2020, the SEC retroactively declared XRP to be an unregistered security and all its trades for the previous seven years to have been illegal, even on the secondary markets. The regulator accused Ripple, which built its business on the use case of XRP as a bridge currency, of selling securities despite the fact that billions of XRP tokens have circulated among hundreds of thousands of other users since 2013 with no connection to the company. Gensler has now upped the ante, saying the SEC, not the Commodity Futures Trading Commission (CFTC), should call the shots on all digital assets. With even greater hubris, Gensler insists to the court that the SEC is under no obligation to set clear, defining, and transparent rules to provide guidance for traders and holders of digital assets, essentially claiming decisions can be made by the agency at their whim on a case-by-case basis, an absolutely ludicrous position.

The recklessness of the SEC’s case against Ripple is simply astounding, not to mention unjust and void of due process. Prior to its lawsuit the SEC gave nearly a decade of confusing and contradictory public signals on XRP to consumers and investors while billions of tokens traded on secondary markets. The SEC gave even more unclear guidance to Ripple in private, according to the evidence filed in the case.

The Ripple case has exposed our nation’s complete lack of legal and statutory clarity in the regulation of not just XRP, but all crypto. This is precisely where Congress must step in and assert its authority to create a clear regulatory framework for digital assets. This month Gensler was grilled by the Senate Banking Committee for his lax and inconsistent treatment of crypto, with Sen. Pat Toomey (R-PA) accusing Gensler of “not sharing with us” the criteria the SEC is using to regulate crypto. Gensler gives vague answers on why Bitcoin is a commodity while the SEC considers XRP a security, even though both are overwhelmingly used in commercial transactions, not held as investments. In a new lawsuit against a market influencer, Gensler hints at total jurisdiction over all Ethereum network transactions anywhere in the world.

In October of last year, the judge in the case granted amici status to what is now more than 73,000 XRP token holders who were immediately harmed by the SEC’s allegation that all XRP tokens are investment contracts in Ripple. Their lawyer, John Deaton, says the vast majority of them had no knowledge or connection to Ripple when the SEC’s action wiped out the value of their holdings. Deaton calls the SEC’s legal theory in the case “dangerous” and a threat to every digital asset holder and consumer. The SEC is so out of control, and going so far past its authority, that consumers have turned on the regulator who is supposed to be protecting them.

The outcome of the SEC case against Ripple is critical in not just establishing a fair and just baseline for the protection of crypto investors, but as a test case in setting boundaries to stop overreach by federal agencies seeking to advance their power at the expense of efficiency. Crypto is popular and growing precisely because of its efficiency, flexibility, and vast utility in financial markets, benefits that can easily be quashed through intrusive and heavy-handed regulation. The ultimate arbiter of these issues is Congress, who must act, and soon, to help establish a clear framework to regulate crypto, and to limit the SEC’s power to occupy spaces where it simply does not belong.